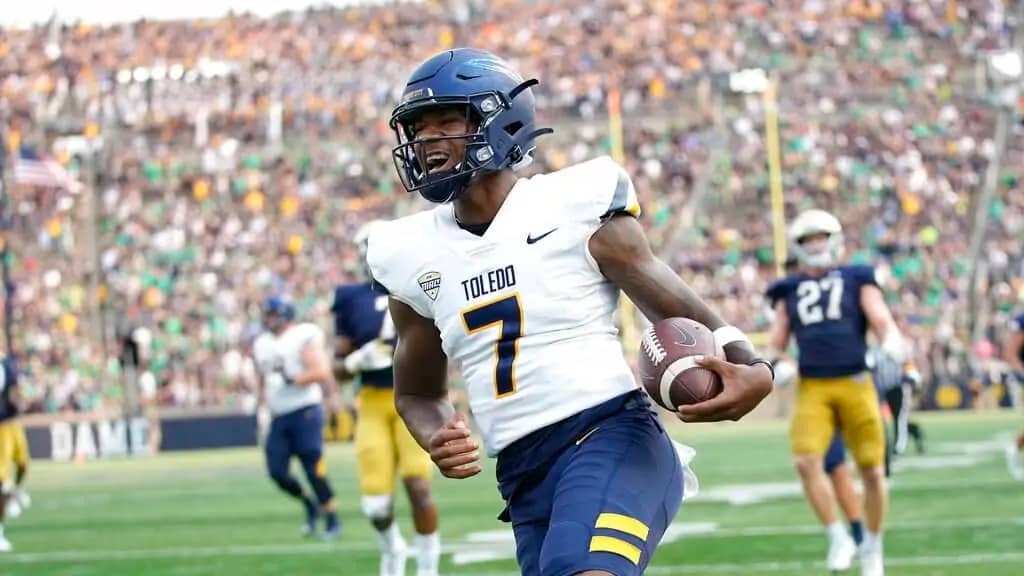 Early season MACtion is here, and if there’s anything to expect from these conference games, it’s that there is going to be some chaos. In recent years, the MAC has brought some of the best games to weekend and weekday slates of college football, and this season is shaping up to be a tight race within the conference.

In this matchup, the Central Michigan Chippewas will travel to the Glass Bowl to play the Toledo Rockets. Toledo comes into this game with a 2-2 record and Central Michigan is 1-3. While a lot of MAC team’s records don’t always look very impressive early in the season, they usually have some of the toughest non-conference matchups in the country, which is good to battle test them as they enter conference play.

Toledo has been historically a strong football program, with bowl appearances year after year and multiple NFL prospects to show from consistent football. While they are 2-2 on the season, there have been some positive takeaways from the first few games, which will be important to build off going forward.

Toledo has been a pass-heavy team so far. They have thrown the ball 62% of the time and averaging 382 yards per game. Quarterback Dequan Finn has not had the most prolific passing numbers quite yet, but he has been able to get things done with his legs, including five touchdowns rushing on the year.

Defensively, the Rockets have been able to hold opposing teams to respectable point totals, except for the Ohio State game. The Buckeyes are one of the best teams in the country, but in each of the other three games, the Rockets have held opponents to 17 points or less. That should have them in position to compete for a win most of the time.

IL, KS and LA: Bet $10, Win $200 if EITHER team scores a TD between Central Michigan and Toledo

Central Michigan has had a tough road, but that isn’t always the worst position to be in before a competitive conference season. The Chippewas have played the 13th-hardest schedule in the FBS, which can make for a frustrating start to the season. But at 1-3, they’ve probably faced the hardest competition they’ll see for the rest of the season until a possible bowl game.

Even with this grueling schedule, the Chippewas have put a competitive product on the field. Quarterback Daniel Richardson has lit it up through the air and has accounted for 1,124 yards passing (23rd in FBS) and nine touchdowns through the air.

The defense will be a major question for the Chippewas come Saturday. Against stronger competition, they have given up quite a bit of points and a lot of yards passing with that as well. This Toledo team doesn’t have the most explosive offense in the country, but they do have talent to stack right up against this Central Michigan roster.

Toledo comes into this game as a 7-point favorite, and the game total is 56.5 points. While Toledo has better overall talent, Central Michigan is not going to go without a fight. The Chippewas have been battle tested since the first week, and while Toledo should pull away with the victory, this will be a tight contest and Central Michigan should cover the 7-point spread with a very close loss.

Both teams are going to try and get things going on offense. The Chippewas will try to put Toledo on their heels early in the game, and even if they fall behind, they’ve proven early in the season that they can score quickly to get back in the game. That is why this contest has the makings to go well over the 56.5-point total.