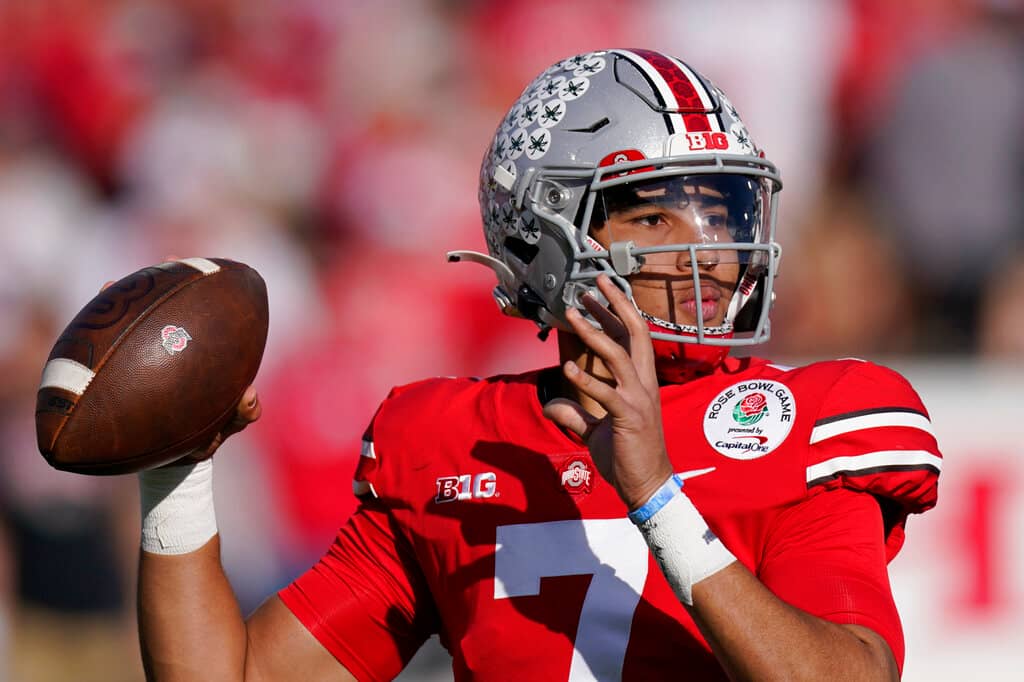 It’s the time of the season in college football where teams can’t afford any letdowns, as the initial playoff rankings loom in the coming weeks. The race for the top four may be a little closer than what many thought before the season started. The road to the playoff is going to go through the Big Ten, as multiple teams have proven to be major competitors this season. In this matchup, the 3-1 Rutgers Scarlet Knights travel to Columbus to face the undefeated Ohio State Buckeyes, who currently sit at No. 3 in the AP Top 25. This game is schedule for a 3:30 p.m. ET kick, and Rutgers looks to go in and surprise one of the best teams in the country.

It has been a very exciting year for Ohio State, and the early success may catapult them into a season to remember. Last Saturday was one of the most impressive wins of the season, with a 52-21 victory on the road at Wisconsin. The Buckeyes dominated in all phases, and they put away the game by halftime. Quarterback C.J. Stroud was impressive and has made his case for Heisman candidate in the first few games. He is tied for first in the FBS in touchdowns passing with 16 and has multiple weapons at receiver, which makes his job much easier.

Defensively, the Buckeyes have gotten the job done and will need to play consistent football throughout Big Ten play. They are 18th in FBS in total defense, and the big thing to keep in mind here is that they have played some very tough competition early in the season. A lot of teams at the top of that list have inflated stats due to the lower competition they’ve faced, but the Buckeyes are battle tested. That should bode well for them as they move through the conference slate.

Scarlet Knights Have a Test

This will more than likely be the toughest test of the season for Rutgers, and they will need to bounce back after a tough loss on their home turf last week against Iowa. The Hawkeyes have a great defense, but Rutgers let their offense get going, which has sputtered in the early part of the season leading up to last Saturday. While Rutgers outgained Iowa in total yards, the Hawkeyes were able to put up 27 points, which tied their season high.

Major question marks still surround this offense. Quarterback Evan Simon threw for a season-high 300 yards last week, but he struggled to take care of the ball and threw two interceptions, on which the Hawkeyes were able to capitalize. While the offense still needs work, the defense has been great, and they’re going to need to play their best football on Saturday. The Scarlet Knights have a top-10 defense in FBS, and the defense is going to need to force turnovers and limit big plays if they want to have a chance of hanging in this game.

It is very excited to watch Ohio State play football, and even Rutgers has played a lot better than a lot of people thought going into this season. Ohio State hosts this game as a 39.5-point favorite, which is a huge number for a conference opponent.

While the Buckeyes will put up some major scoring numbers, this game will not get quite that out of hand. They should win with ease, but Rutgers should cover this 39.5-point spread. The game total is 58.5 points, which is fair considering Ohio State’s explosive offense. It will want to establish both a solid run game and then open things up with the pass against a very strong Rutgers defense. Even with how well the Scarlet Knights have played for the most part, the Buckeyes should light the scoreboard up, and this game looks good to finish over the 58.5-point total when it’s all said and done.