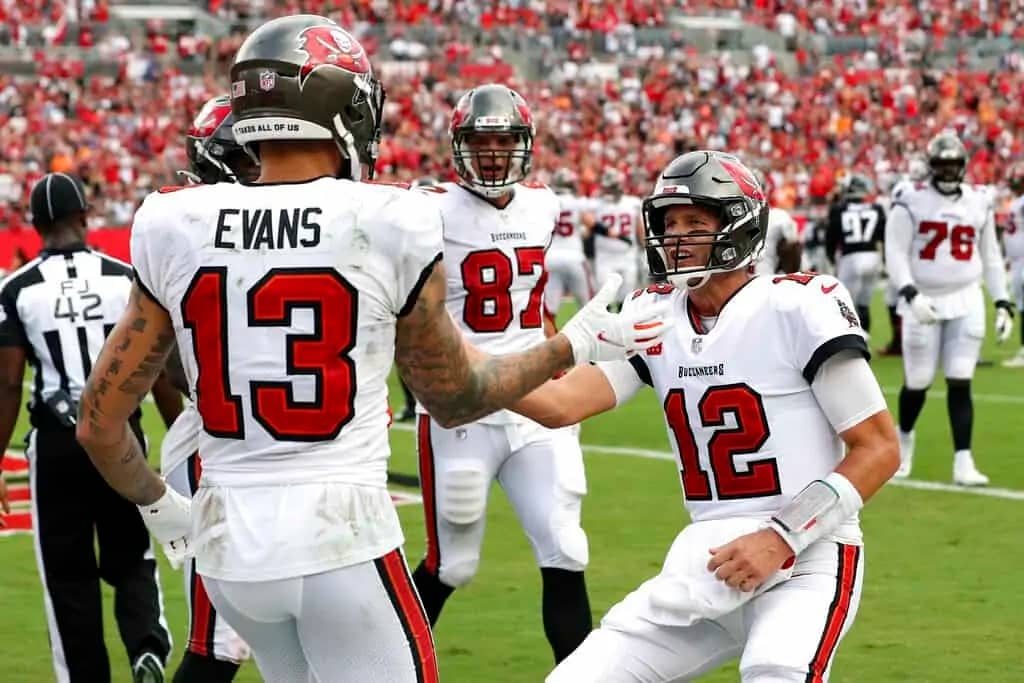 The 2-1 Chiefs will travel to Tampa Bay to face the 2-1 Buccaneers on Sunday, and both teams are looking to right the ship after disappointing Week 3 losses. The Chiefs gave up a go-ahead touchdown to the Colts in the fourth quarter, while the Buccaneers trailed the Packers from the first quarter onward. Both teams have looked solid aside from those losses, and the sportsbooks predict the Chiefs will narrowly top the Buccaneers on Sunday Night Football.

This is the first meeting between these teams since Super Bowl LV. The Buccaneers easily dispatched the Chiefs in that game, but they have lost a fair amount of talent since then. The Chiefs have lost their fair share of players as well, and they enter the Week 4 matchup trailing the Buccaneers in total defense-adjusted value over average (DVOA).

The Chiefs have played a balanced brand of football thus far. Through three weeks, they rank 10th in offensive DVOA and ninth in defensive DVOA. That said, their offense has leaned considerably toward the passing game. The Chiefs rank an impressive seventh in passing DVOA but only 29th in rushing DVOA. Star quarterback Patrick Mahomes has looked as good as ever without Tyreek Hill -- he has completed 67.9% of his passes for eight touchdowns and 7.59 net yards per attempt (NY/A). He has thrown a single pick and taken just two sacks. Mahomes has put up those impressive numbers despite facing pressure on 31.6% of his dropbacks, which ranks fifth highest. Every other quarterback to face that much pressure has taken at least eight sacks.

Kansas City's offensive line has underperformed. Although the unit ranks first in adjusted sack rate, it ranks only 16th in pass block win rate and 23rd in adjusted line yards. Kansas City's rushers have averaged only 1.7 yards before contact per attempt (YBC/A). This is despite strong play from guard Joe Thuney and center Creed Humphrey. Left tackle Orlando Brown Jr and right guard Trey Smith own the worst PFF grades of Kansas City's offensive linemen at 62.3 and 56.4, respectively. Most metrics suggest the Chiefs have struggled more in the trenches than the box score suggests, but they have benefited from only playing teams with mediocre pass rushes. Both the Colts and Cardinals rank bottom-four in adjusted sack rate, and the Chargers rank just 20th.

Kansas City's defense has looked solid. The Chiefs rank fifth in yards allowed per play (4.6) and fifth in opponent first downs per play (.28). The defensive front ranks sixth in adjusted line yards and 10th in adjusted sack rate. No team has scored more than 24 points against Kansas City this year. Although the Chiefs lost star safety Tyrann Mathieu in the offseason, replacing him with Justin Reid has worked out well. That said, the secondary isn't perfect -- boundary cornerback Rashad Fenton owns an unimpressive PFF grade of just 57.9 and has allowed 160 yards on 15 targets this year.

Brady and Buccaneers Struggling on Offense

Unlike the Chiefs, the Tampa Bay Buccaneers have not looked balanced. The offense has seriously underperformed, although lengthy injury reports may account for some of those difficulties. The Buccaneers rank a lowly 27th in offensive DVOA. Quarterback Tom Brady has completed 65% of his passes for three touchdowns and only 5.82 NY/A. Brady is on pace for his fewest passing touchdowns ever and his lowest NY/A since 2002.

Brady can blame his supporting cast for some of those struggles. An impressive 83% of his throws have been on target, which ranks third highest -- but 8% of his passes have gotten dropped, which also ranks third highest. Mike Evans remains the best wideout in Tampa Bay, as he has generated 63 defense-adjusted yards above replacement (DYAR) on only 11 targets. None of Tampa Bay's other receivers have come close to that mark -- the next-best wideout, Russell Gage, has generated only seven DYAR on 21 targets. Breshad Perriman, Scotty Miller and Cole Beasley have all generated negative DYAR. Getting Chris Godwin would be big, but he may not be at 100% quite yet. The offensive line has looked respectable despite having to replace everyone between the tackles, and with Donovan Smith returning, the unit should get a shot in the arm.

The Buccaneers should benefit from the returns of several key assets. Getting Evans back from his one-game suspension will likely reinvigorate the stalled passing offense, especially with Julio Jones and Chris Godwin also available to draw attention from defenses. Adding Donovan Smith back to the trenches will help Brady get the ball downfield as well.

The Buccaneers may not win on Sunday night, but if they want to keep things close with Kansas City, look for Brady to air out several long passes to Evans. He has been the clear-cut best receiver in Tampa Bay this season. The Chiefs look solid in the secondary, but they have given up enough big plays to big-bodied boundary receivers like Mike Williams and Michael Pittman to warrant a wager on Evans.

OddsShopper's industry-leading tools allow bettors to identify the best available lines on all sorts of betting markets, from traditional spreads and totals to player props -- and even quarter- or half-based derivatives! Bettors can sign up for an OddsShopper account to our model's predictions and best bets for each game. For the Sunday Night Football matchup between the Chiefs and Buccaneers, the model has identified Mahomes as a player to fade at his current price.

Betting the under on Mahomes' total pass completions yields the highest expected ROI of any prop, spread or total for this game. Bettors looking to take advantage of that line can head to DraftKings for the best price on the market!