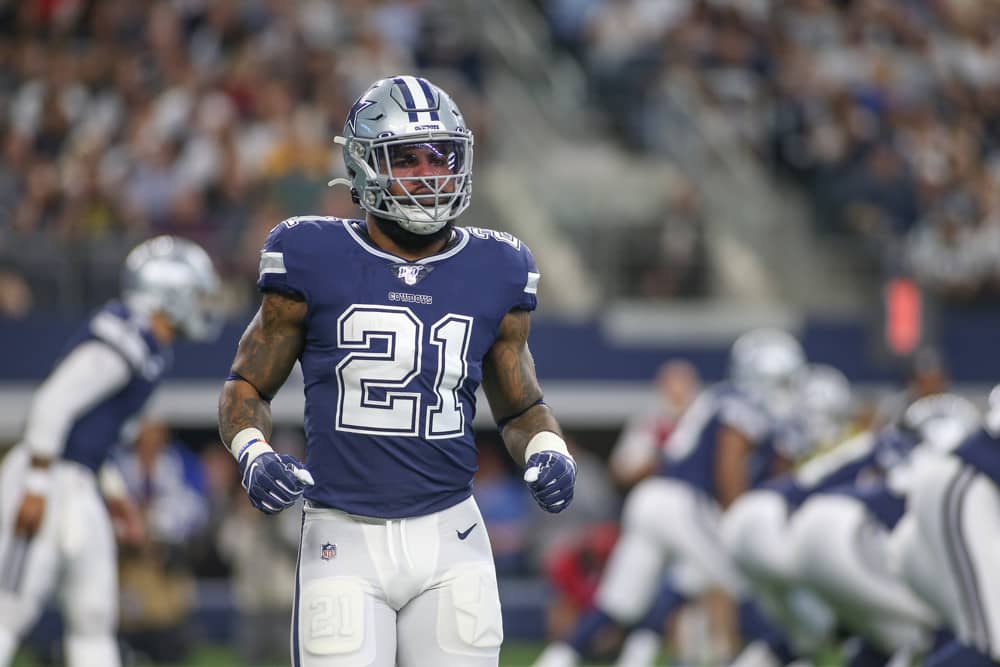 The New York Giants are off to an electric 2-0 start. With second half comeback wins over the Titans and Panthers, the Giants find themselves tied with the Eagles atop the NFC East. The Dallas Cowboys haven’t been so lucky. Franchise quarterback Dak Prescott went down in Week 1, but backup Cooper Rush still helped steer the team to a Week 2 win over the Bengals. The sportsbooks predict a close game between the Giants and Cowboys, with New York favored by a single point on Monday Night Football.

Both teams enter Monday’s contest with injuries to key players. The Cowboys obviously won’t have Prescott, and both safety Jayron Kearse and guard Connor McGovern will join him on the sidelines. Pass catchers Dalton Schultz and Michael Gallup are both questionable. For the Giants, stud defensive lineman Leonard Williams is doubtful, and rookie pass rusher Kayvon Thibodeaux is questionable. Offensive weapons Wan’Dale Robinson and Kadarius Toney are out and doubtful, respectively.

The Cowboys proved that they aren't completely doomed without Prescott by beating the Bengals last Sunday. Through two games, backup Cooper Rush has completed 59.1% of his passes for one score and 6.0 net yards per attempt (NY/A). He has thrown no interceptions but has taken three sacks. The Dallas offensive line hasn't helped Rush much, though -- the unit has allowed pressure on 31.6% of its quarterbacks' dropbacks. Losing left guard Connor McGovern has thrust backup Matt Farniok into the lineup, and he owns an abysmal PFF grade of just 36.9. The Cowboys rank 21st in adjusted sack rate and 17th in adjusted line yards. That said, veteran tackle Jason Peters could make his first appearance for Dallas on Monday.

Injuries have taken their toll at other positions as well, especially in the receiving corps. Michael Gallup missed the first two games but could return on Monday night. Tight end Dalton Schultz will probably miss at least one game with his injury but hasn't yet been ruled out. Those injuries have thrust Noah Brown and CeeDee Lamb into higher-volume roles -- and narrowed Rush's options. The Cowboys were already entering the year without Amari Cooper, so it's no wonder that the passing game has looked shaky at best.

The defense has remained relatively healthy and looks solid. The Cowboys own the third-most total sacks (8) and the third-best adjusted sack rate. They have allowed the sixth-fewest yards per play (4.7) and the 13th-lowest third-down conversion rate (35.5%). That said, the defensive front has struggled against the run: the unit ranks 28th in adjusted line yards. That problem became apparent in Week 1 when Leonard Fournette gashed Dallas for 127 yards rushing. Joe Mixon ran for only 57 yards last week, but Cincinnati's offensive line ranks dead last in adjusted line yards. The Cowboys lack a true run-stuffer in the trenches, and that could cause problems over the course of the year.

Are Giants Undefeated But Overrated?

The wins are there, but they weren't pretty -- New York's opponents are a combined 0-4. Still, quarterback Daniel Jones has done what he needs to do. Jones has completed 70.9% of his passes for three scores and 5.05 NY/A. He has thrown one pick and taken eight sacks, but the offensive line shares some blame for those failings -- Jones has faced pressure on 36.6% of his dropbacks. Left tackle Andrew Thomas is off to an elite start with an 89.1 PFF grade, but no one else on the line owns a grade above 50.5. The unit ranks 30th in adjusted sack rate and 20th in adjusted line yards.

The Giants currently lack playmakers outside of running back Saquon Barkley. The team ranks 21st in yards per play with 5.1 as a result. Jones and Barkley have accounted for 282 of New York's rushing yards, or 82.6%. Jones' leading receivers are castoff Richie James and veteran Sterling Shepard. The duo ranked 46th and 47th in total receiving yards after Week 2, respectively. Getting Wan'Dale Robinson or Kadarius Toney back would have been big for New York but that isn't in the cards.

The defense has played well but is primed for regression. The Giants rank a respectable 16th in yards allowed per play (5.6) and first in third-down conversion percentage allowed (21.7%). However, losing defensive tackle Leonard Williams to an MCL sprain will hurt New York in the trenches. It isn't all bad news -- rookie first-round pass rusher Kayvon Thibodeaux might make his NFL debut this week. Still, Williams has been a key part of New York's run defense, and someone else must now step up alongside Dexter Lawrence in the trenches.

The Williams injury hasn't swung the prop markets sufficiently. After the star defensive lineman went down midway through the third quarter last week, Panthers running back Christian McCaffrey ran four times for 63 yards. He had run 11 times for only 39 yards before his injury. With Williams confirmed out for Monday Night Football, expect the Giants to struggle in the trenches.

While the Cowboys haven't looked great in the trenches themselves, running back Ezekiel Elliott is still averaging 4.2 yards per carry, and the line has gotten him 2.5 yards before contact per attempt. Elliott isn't the flashy playmaker he once was, but with a backup quarterback under center and a banged-up receiving corps, look for Elliott to surpass this relatively low number on Monday night.

OddsShopper's industry-leading tools allow bettors to identify the best available lines on all sorts of betting markets, from traditional spreads and totals to player props, and even quarter or half-based derivatives. Bettors can sign up for an OddsShopper account to access our model's predictions and best bets for each game. For the Cowboys and Giants matchup, the model has identified one quarterback passing prop as the line to target at its current price.

Backing Daniel Jones to throw for at least two touchdowns yields the highest expected ROI of any available prop, spread or total. Bettors looking to take advantage of that line can head to FanDuel for the best price on the market!