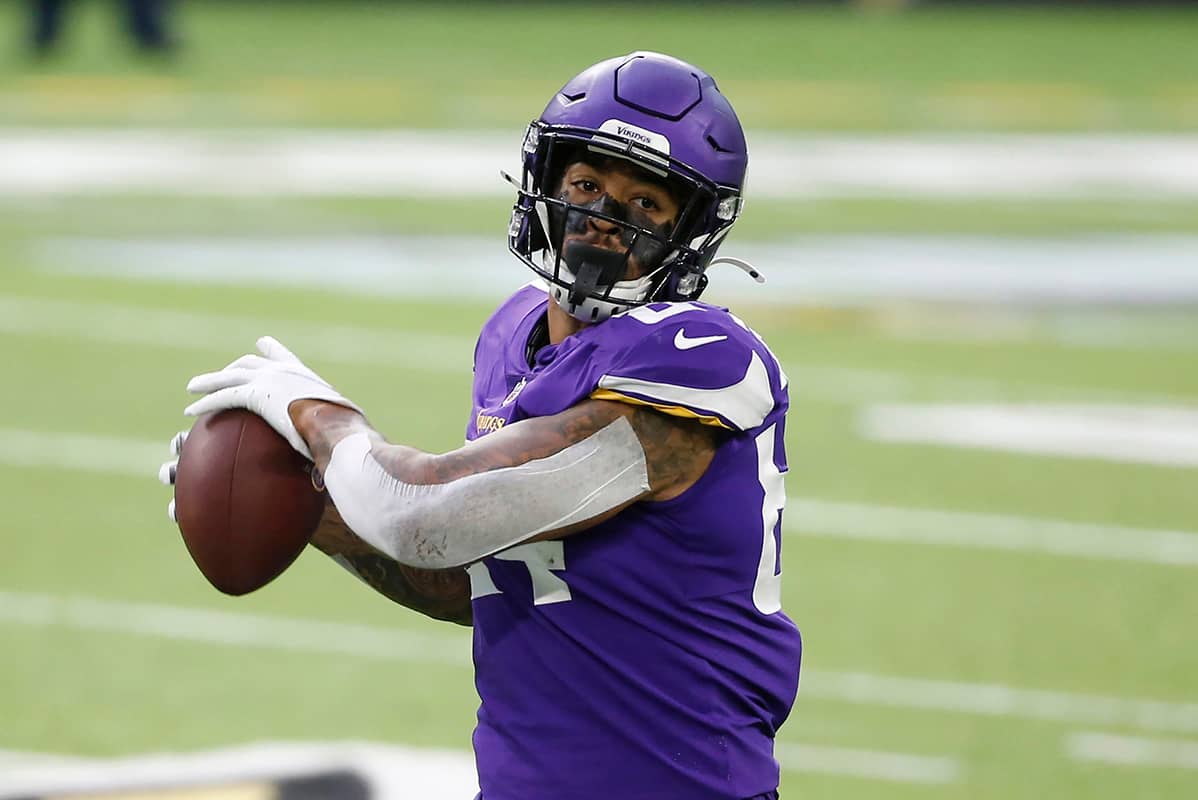 The New Orleans Saints and Minnesota Vikings will travel to England for a game at Wembley Stadium early on Sunday morning. Both teams enter the contest dealing with a fair share of injuries. For New Orleans, starting quarterback Jameis Winston is doubtful to play through his back injury. At wide receiver, Michael Thomas is out with a foot injury and Jarvis Landry is questionable with an ankle injury. For Minnesota, star running back Dalvin Cook injured his shoulder but will play, while edge rusher Za’Darius Smith is questionable with a knee injury. The sportsbooks are predicting that the Vikings will top the Saints on Sunday, as Minnesota is a field-goal favorite in the NFL betting markets.

The books’ assessment makes sense. Minnesota enters Week 4 at 2-1, with wins over a banged-up Packers team and the Lions. Still, it took a failed fourth-down conversion and a late-game comeback for Minnesota to win last week. In contrast, the Saints enter Week 4 at 1-2, with one narrow win over the Falcons and losses to the Buccaneers and Panthers. That said, backup quarterback Andy Dalton may prove to be an upgrade over the banged-up Winston.

The Saints head into Sunday's matchup with a big question mark at quarterback. Winston, who is doubtful, has struggled this season. Winston has completed 63.5% of his passes for four touchdowns and 6.22 net yards per attempt (NY/A). He has also thrown an NFL-high five interceptions and taken 11 sacks. Winston's Saints rank 27th in total DVOA. The offense ranks 26th, and the special teams rank 32nd. But with Dalton likely getting the start, the offense should turn the ball over less often -- Dalton's 2.7% career interception rate is well below Winston's 3.4%.

Regardless of Winston's play, the Saints have looked worse than last year. The lone bright spot has been wide receiver, but the injuries to Thomas and Landry leave the Saints shorthanded at the position. Still, rookie wideout Chris Olave has looked fantastic and owns the seventh-most receiving yards this year. But the offensive line has regressed without Terron Armstead, the secondary looks worse with Marcus Maye and Tyrann Mathieu replacing Malcolm Jenkins and Marcus Williams, and the pass rush ranks 28th in adjusted sack rate.

The New Orleans defense continues to fare well in a few metrics. The unit ranks 10th in DVOA, 10th in yards allowed per play (5) and seventh in opponent third-down conversion rate (31.8%). However, the Saints rank only 17th in adjusted line yards and 28th in adjusted sack rate. New Orleans' unimpressive early schedule may have allowed its defense to look better than it is. Two of the Saints' past opponents, the Panthers and Buccaneers, rank in the bottom eight for offensive DVOA. The historically successful unit has been on a downward trend due to key pieces leaving via trade or free agency, and the wheels could come off as the season progresses.

Vikings quarterback Kirk Cousins stunk it up on Monday Night Football in Week 2, but he rebounded with a solid comeback win over the Lions in Week 3. Cousins led the Vikings on two fourth quarter scoring drives that culminated in a go-ahead 28-yard passing touchdown to wide receiver K.J. Osborn with 0:45 left on the clock. Following the win, the 2-1 Minnesota Vikings rank 17th in total DVOA and 11th in offensive DVOA.

Like the Saints, the Vikings enter Week 4 with a big injury on offense. Cook went down with a shoulder injury but will play. Even if the Vikings have to limit Cook's usage, backup Alexander Mattison has always looked excellent behind Cook. Mattison ran for 356 yards on 4.13 yards per carry (YPC) and scored twice when starting in place of Cook last year. No signs point to Mattison slowing down this year, either -- he has averaged 4.2 YPC on 17 carries thus far.

But Minnesota's defense has struggled. The Eagles and Lions both exploited it early for a combined 38 first half points in their matchups. The unit ranks 25th in defensive DVOA. Minnesota ranks 25th in yards allowed per play (6) and 28th in yards allowed per pass (7.5). None of Minnesota's cornerbacks rank among PFF's top 50, and all own coverage grades below 60. Nickel cornerback Chandon Sullivan owns the worst coverage grade in the secondary. That said, the pass rush ranks a respectable 17th in adjusted sack rate and has generated plenty of pressure. Things haven't gone much better on the ground -- the rushing defense ranks 18th in yards allowed per rush (4.7) but 31st in rushing defense DVOA and 26th in adjusted line yards.

The Vikings have underperformed against players working out of the slot. While that would usually warrant a bet on Landry, his injury makes such a play less sharp -- and the books haven't posted props for him yet, either. Instead, tight end Juwan Johnson warrants a wager because of his big slot role -- he has taken 39.7% of his snaps out of the slot. Johnson played a smaller role last week, but his 68.7% route participation on the season is encouraging, especially with the Saints pressed for depth.

While it's unclear whether Dalton has the same chemistry with Johnson as Winston does, the number for this prop opened a bit lower than it should have. Johnson totaled at least 40 receiving yards in Week 1 and 2, but his no-catch performance in Week 3 dropped this number all the way down to 18.5. This number could tick up much further if Landry gets ruled out, so get your action down on Johnson early.

OddsShopper's industry-leading tools allow bettors to identify the best available lines on all sorts of betting markets, from traditional spreads and totals to player props -- and even quarter- or half-based derivatives. Bettors can sign up for an OddsShopper account to access our model's predictions and best bets for each game. For the Week 4 matchup between the Vikings and Saints, the model has identified a Minnesota tight end as a player to target at his current price.

Betting the over on Irv Smith's receptions yields the highest expected ROI of any prop, spread or total for this game. Bettors looking to take advantage of that line can head to DraftKings for the best price on the market!