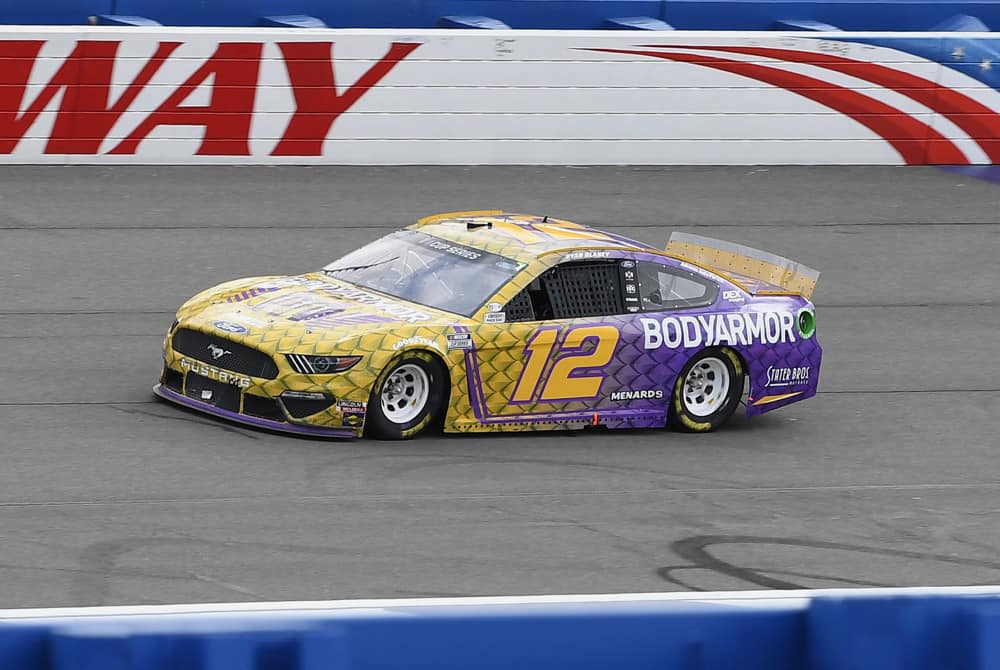 NASCAR returns to Alabama for 500 miles of racing around the superspeedway in Talladega this Sunday. As the second leg of the second round of the playoffs gets underway with the YellaWood 500, let’s take a look at this weekend’s top outrights, odds for top-five finishes, best bets, and parlays offered by BetMGM.

Weekly readers of The Finish Line will remember how the structure of this article shifted the last time NASCAR was at a superspeedway. For those expecting the same for this Sunday’s event at Talladega, prepare to be either disappointed or at least enlightened. The nature and consequences of the summer Daytona race lent itself to taking big shots in the betting markets — a situation that nearly manifested itself as Corey Lajoie (that week’s headliner of this article) was running second to Ryan Blaney before pandemonium struck the field on the final lap. However, for this week at Talladega, the odds of someone with big odds crossing the finish line do not line up with recent trends at Talladega.

Dating back to 2010, only two of the previous 11 winners in the fall Talladega race were non-playoff drivers. In fact, the last time this occurred was 2013 when Jamie McMurray won. Seven straight occurrences are more than a trend at this point. It only makes sense to see this continue and that one of our 12 remaining playoff drivers will be the one to win this event. For those looking for an explanation, simply put, it may be the rest of the drivers in the field understand the consequences of this race and do not want to be the reason a driver does or does not advance into the third round of the playoffs. Yes, inevitable, a few of the playoff drivers will wreck out due to uncontrolled circumstances — perhaps even the big one. However, the last thing Josh Billicki, Quin Houff or Anthony Alfredo want is to have a late impact on this race and be ostracized by the community of teams and drivers when Silly Season is underway and they need a new ride.

As of this weekend, Denny Hamlin opened (+800) as this week’s favorite at BetMGM and continues to hold that position. Hamlin is the reigning fall Talladega winner and has crossed the line sixth or better in the previous five fall Talladega events. The driver with some of the worst luck, in recent memory at superspeedways, Joey Logano sits at +900 — a testament to his history at Daytona and Talladega (4 wins combined). The driver with the most line movement, although minimal at best, has been Brad Keselowski moving up from +1200 to +1000 as of Friday. Keselowski is another multiple-time winner in superspeedway events and has oddly been just as snakebit as Logano of late. According to BetMGM, Keselowski is responsible for their highest handle — 16.2%.

The surprise number, coming out of BetMGM is Kyle Larson being responsible for their highest ticket percentage — 9.1% in fact. This enthusiasm feels a little unwarranted as Larson has no wins, no top-fives, and just four top-10 finishes in 28 combined Daytona-Talladega starts in the NASCAR Cup Series. Yes, Larson has had a career season in 2021 but in no way can his results in either the 550- or 750-horsepower packages find correlation to this weekend. Generally, drivers who excel at superspeedways have demonstrated the ability to do so in the past and Talladega has not been Larson’s type of track whether in the short or long term.

When NASCAR returns to a superspeedway the sportsbooks immediately react by shoring up the odds on typical longshots. It is what happened at Daytona when Corey Lajoie was a value at +6000, whereas his typical number can be found hovering around +75,000 as it was at Darlington. Sportsbooks know just how chaotic these races can become and the last thing they want is another Daytona 500 situation where a driver like Michael McDowell survives and his tickets put the book in a bind.

With shorter outright odds comes even shorter top-10 odds. For any ticket with meaningful plus value, betters need to turn their attention to top-three or top-five bets. One driver with value in the top-10 market is Ryan Preece at +700 for a top-five finish. Oddly enough, Preece has been the Cup Series’ most consistent driver this season, in superspeedway races, as the only driver to finish in the top 15 in all three events. Furthermore, he is just one of two total drivers, in the entire field, to have finished on the lead lap in every Talladega race he has competed in since 2018. Despite coming from Modified background, Preece has found a knack for Talladega, and hopefully, that continues this Sunday as he pushes for his first top-five at Talladega since the spring 2019 race.

The following are an interesting list of best bets, props, and parlays offered by BetMGM for Sunday’s YellaWood 500: