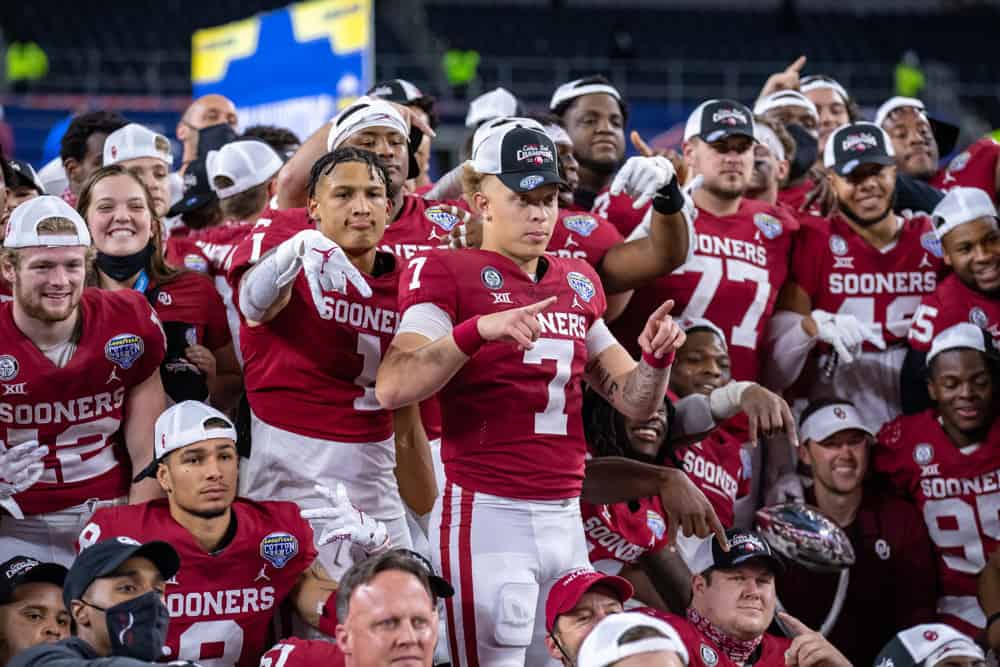 The Heisman Trophy is the most storied award in college sports. The Vegas odds and betting lines for the award continue to heat up throughout the summer months. With evolving betting markets, taking an early stand often leads to favorable odds in this market. This year’s Heisman Trophy looks no different. This piece will discuss the best college football bets and which type of players win the Heisman, expert college football picks for the award and candidates who have the best Vegas odds.

Who Traditionally Wins the Heisman Trophy?

The Heisman Trophy has been awarded since 1935. However, Heisman winners continue to evolve as the college game changes. For the purposes of this study, Heisman winners will focus on the last 20 years from 2001 to the present.

In this span, 16 of the 20 winners played quarterback. They also largely played on winning teams. Of the winning signal-callers, only three finished with more than two losses. Lately these quarterbacks have contributed on the ground. While names like Carson Palmer and Matt Leinart dominated the early 2000s, Lamar Jackson, Cam Newton and Marcus Mariota provide examples of the new-age Heisman winner. The entire sample also came from the Power Five conferences. The last player to win from a non-Power Five school was BYU’s Ty Detmer in 1990.

For the four non-quarterbacks, three played running back and the sample’s lone receiver DeVonta Smith took down the award last year. Similar to quarterback, all played on winning teams in Power Five conferences. No one in this sample played on a team with more than one loss. Three also played for Nick Saban at Alabama (Smith, Derrick Henry and Mark Ingram. That said, on-quarterbacks must play on near-perfect, Power Five teams.

Rattler completed 67.5% of his passes for 3,031 yards and 28 touchdowns last season. Playing under Lincoln Riley, Kyler Murray and Baker Mayfield won the Heisman in 2018 and 2017. Oklahoma is the favorite to win the Big 12 and has a win total set at 11. They return seven starters on offense while adding offensive line starters Robert Congel and Wanya Morris from the transfer portal. They are also returning their top three receivers. At +800, Rattler is still the best bet for winning the Heisman.

The top quarterback recruit in 2020, Young projects to start at Alabama this year. He is replacing Mac Jones will, but he will not have the luxury of throwing to Jaylen Waddle or Smith. They also lost Najee Harris, Miller Forristall and three starting offensive linemen. However, Alabama recruits better than any team in the country, and Young has dual-threat ability. Alabama is still the favorite to win the SEC and projects for 11.5 wins. The Crimson Tide are in a rebuilding year, while Oklahoma returns most starters. This makes Rattler a superior bet, but Young at +1000 or longer is a pick many college football experts will make.

Replacing Trevor Lawrence at Clemson, Uiagalelei started a pair of games as a freshman last year. He threw for 342 against Boston College and 439 against Notre Dame, showing why he was a five-star recruit in the 2020 cycle. Clemson projects for 11.5 wins and is a -900 favorite to win the ACC. This year they return three offensive line starters and star receiver Justyn Ross from injury. With a star-studded defense, a strong season from Uiagalelei should put him firmly in the Heisman conversation. Quarterbacks generally need nearly perfect seasons to win, and Clemson’s opening game against Georgia presents a potential roadblock. However, a strong performance in that game could make Uiagalelei an early favorite.

A December ACL tear clouded King’s effectiveness last year. After an 8-3 season in 2020, Miami has the second-shortest odds to win the ACC. As such, King checks almost every box as a Heisman candidate. He is a strong rusher as well, so his main concern now comes from injury. Miami returns every starter on offense except Brevin Jordan, along with nine starters on defense. They also added former Oklahoma receiver Charleston Rambo via transfer, so this offense has explosive potential under second-year offensive coordinator Rhett Lashlee. Outside of Alabama in Week 1, Miami has one of the easier ACC schedules, dodging Clemson and drawing North Carolina at home.

With Justin Fields moving to the NFL, Stroud is the frontrunner to start at quarterback at Ohio State. He does not offer much rushing ability, but he returns the top wide receiver room in college football, with Garrett Wilson and Chris Olave. Ohio State also is the favorite to win the Big Ten and projects for 11 wins. The Buckeyes return three starters on the offensive line, including potential first-round pick Thayer Munford. Ohio State draws a tough non-conference opponent in Oregon, but the rest of their schedule is winnable in a down Big Ten East. Stroud is a bet on situation for an Ohio State team recruiting at the highest level in college football.

Now entering his third season as Ole Miss’s starting quarterback, Corral will also be in his second year under offensive savant Lane Kiffin. Last year Corral completed 70.9% of his passes for 3,337 yards and 29 touchdowns. A strong dual threat, Corral also rushed for 506 yards and another four touchdowns. More importantly, Ole Miss improved as a team and finished with bowl eligibility. Projecting for 7.5 wins this year, the Rebels have a chance to take another step forward. While they will face Alabama, Ole Miss has one of the easier schedules in the SEC, dodging Georgia and Florida. Corral lost star receiver Elijah Moore, but he returns multiple starting pass catchers and four starters on the offensive line. With a strong season and an upset or two, Corral could enter the Heisman race in Kiffin’s elite system.

Taking over for Kyle Trask, Jones enters his fourth season at Florida. He has been described as a rare arm talent and a strong dual threat. However, Florida lost Kadarius Toney and Kyle Pitts to the NFL, putting more pressure on Jones’ individual performance. Florida returns three starters on the offensive line and just five starters on offense. They will play Alabama and Georgia at home but still project for nine wins. While the situation is not ideal, Jones’ rushing ability gives him chance to pay off his +4000 odds.

Willis passed for 2,250 yards and 20 touchdowns last year in his first year as starter. He also rushed for 944 yards and another 14 touchdowns. Unfortunately, Willis does not play in the Power Five, making him unlikely to win this award. However, Willis has drawn first-round hype and possesses strong dual-threat ability. Liberty projects to win nine games, but they play just two Power Five opponents in Syracuse and Ole Miss. Willis likely needs a Lamar Jackson-type season to win the Heisman, but that is in his range of outcomes.

For non-quarterback bets, sticking with the best teams in the country offers the best chance of winning wagers. With unsettled running back rooms at Alabama, Clemson, Oklahoma and Georgia, Ohio State’s Teague provides the best odds. Teague may cede work to impressive freshman TreVeyon Henderson, but he will have the first crack at the job. Last year Teague rushed for 514 yards on 104 attempts while adding five receptions before getting hurt. Playing behind a strong offensive line with a first-year quarterback, Teague could see the volume for a Heisman-level campaign.

Entering his third season as Texas A&M’s starting running back, Spiller has back-to-back 900-yard rushing seasons. He is also excellent as a pass catcher, recording at least 20 receptions in those two seasons. Unfortunately, Spiller plays the running back position and plays for team projected to finish third in the SEC. However, Texas A&M lost Kellen Mond, potentially elevating rushing attempts. Complicating matters, they also lost four starting offensive linemen. Luckily, the Aggies play a relatively easy SEC schedule featuring Alabama and LSU as the toughest opponents. While Spiller is unlikely to win the award, the odds are too favorable not to sprinkle a small wager here.

Hovering between +2000 and +3000 across sportsbooks, Texas’ Robinson looks like one of the worst bets on the board. Robinson plays running back for a team projected to finish third in a weak Big 12 conference. He is a solid player individually, but Robinson only checks the Power Five box. With elevated betting odds, he does not make any sense in the Heisman markets. Spiller plays in a similar situation and offers substantially better odds.

Daniels may intrigue some people in the Heisman markets. He is a returning starter for a Georgia program projected to win 10.5 games. Georgia has a winnable schedule featuring Clemson and Florida as its toughest opponents. However, Daniels offers no dual-threat ability and plays in a run-first Georgia offense. Last year Georgia passed 46.4% of the time (67th) while running 70.3 plays per game (84th). Georgia also lost alpha receiver George Pickens to an ACL tear this offseason. With pocket passers struggling to win the Heisman in today’s college football, Daniels is a pass.

Another non-Power Five quarterback, Ridder enters his fourth season as starting quarterback for Cincinnati. His odds are between +3000 and +3300, and Ridder looks inferior to Malik Willis in every regard. Cincinnati plays a far more difficult schedule than Liberty, and Ridder is not on Willis’ level as a runner or passer. In addition to their AAC schedule, Cincinnati faces Indiana and Notre Dame in non-conference play. With this level of competition, Cincinnati needs an unbeaten season for Ridder to win the Heisman. 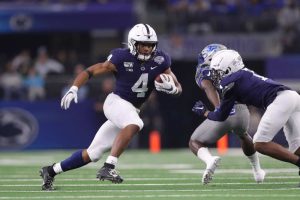 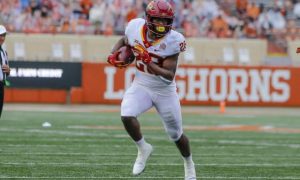 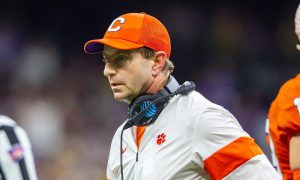 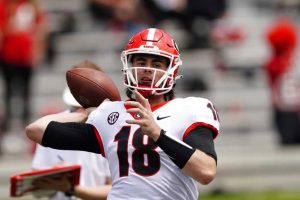 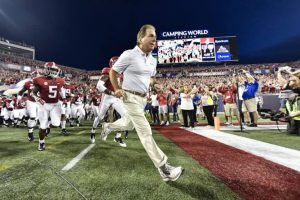