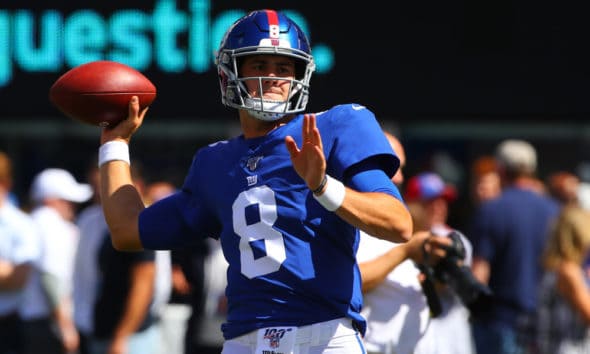 There is an interesting Monday Night Football matchup between the New York Giants and the Tampa Bay Buccaneers. These prime-time games have turned in big individual performances, and there are plenty of exciting players in tonight’s game. Let’s take a look at the best Giants vs. Buccaneers bets for the Week 11 Monday Night Football game, using the Awesemo OddsShopper.

Finding the most profitable NFL betting picks has never been easier. The newly updated OddsShopper tool is like the Amazon of sports betting. Simply filter, sort the page and find the NFL best bets within seconds, as seen below.

When sorting OddsShopper by expected win percentage, this prop comes to the top. It has Kadarius Toney projected for 66.6 yards receiving, giving this prop a 76% chance to hit the over and an expected ROI of 38%. For the Giants to win or even stay competitive in this game, they will need to move the ball effectively through the air. Their most dangerous receiving weapon is undoubtedly Toney, the talented rookie receiver. While the Giants offense is getting healthier, starting receiver Sterling Shepard remains out, so Toney will play a major role. They must figure out ways to get the ball in his hands.

Daniel Jones has always stepped up his game on Monday Night Football. He has averaged 241.8 yards passing per game on Mondays, compared to 223 per game overall for his career. The Giants are expected to lose this game, which points to Jones passing a lot to keep up with Tom Brady. The matchup is right as well, as Tampa Bay ranks in the bottom half of the league in yards allowed passing per game, giving up 254.2. OddsShopper gives this prop a 64% chance to hit the over and an expected ROI of 22%, projecting Jones for 260 yards tonight.

Mike Evans is the big play guy for this Tampa, but he is not a volume receiver. He has totaled fewer than six receptions in back-to-back games and three of his past five. Assuming the Buccaneers take care of business like many think they will, Tampa will not need to force the ball downfield to Evans late in the game. They will be able to feed the running game instead. OddsShopper gives this passing prop a 70% chance to hit the under, projecting Evans for 4.5 receptions.