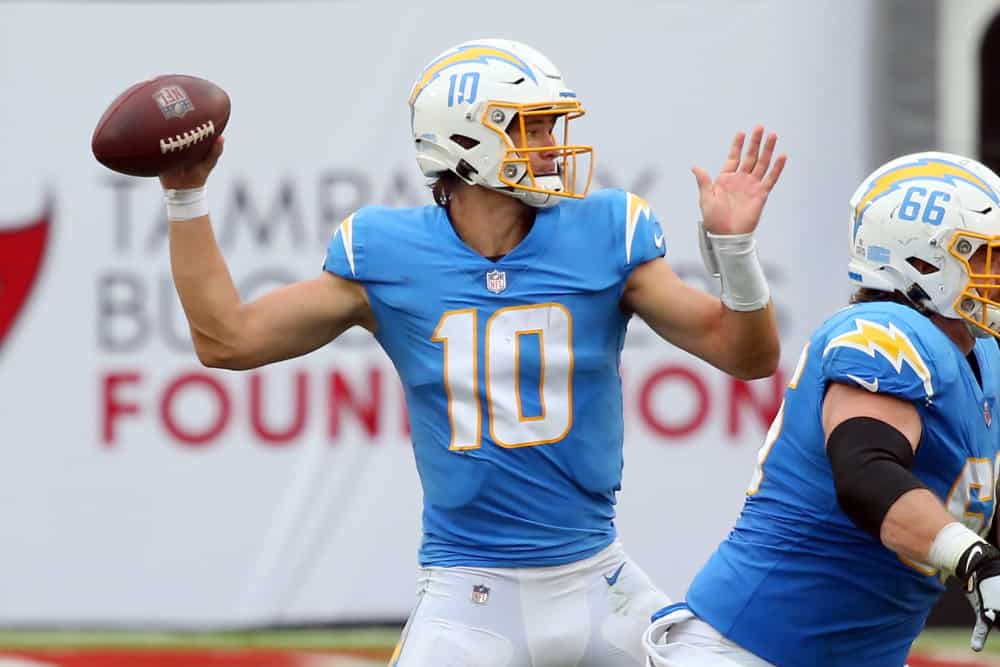 The Los Angeles Chargers have been on a slippery slope from first place in the AFC West while Justin Herbert looks to right the ship against the Pittsburgh Steelers on Sunday Night Football. With the new Awesemo NFL Player Props Tool, bettors can now search player props by team and immediately pinpoint the best available odds at recognized sportsbooks. Let us take a look at the tool’s projections and odds for Week 11 Thursday Night Football to lock in the bets on Herbert tonight.

With the latest groundbreaking features in sports betting featured in the OddsShopper tool, finding the best bets has never been easier. With the ability to simply filter, sort and bet, you can now land the best bets and odds in 30 seconds or less. You can even create a Prop Party Parlay with a mix of your own favorite props of the day.

Justin Herbert has been recently limited in finding the end zone yet the Player Props Tool suggests he’ll be back to his early season form on Sunday Night Football. As you can see in the example above the best odds and bets on Herbert have never been easier to find thanks to the OddsShopper tool. Herbert is averaging 2.11 passing touchdowns per game through nine games played and the props tool projects the over with a 62% expected win rate. With Herbert projected for 1.99 passing touchdowns against the Steelers, the props tool projects the over with a 3% return on investment.

The Player Props Tool suggests a close one when it comes to the passing yardage for Herbert, with projections wedged in between the over and under where they stand now. Herbert is averaging 282.8 passing yards per game through nine games and the props tool projects the over with a 52% expected win rate. Herbert is projected for 274.1 passing yards against the Steelers and the props tool positions the over with a -1% return on investment which mirrors the under. While the Steelers have surrendered 244.33 passing yards per game to opposing quarterbacks through nine games, their latest injury absences on defense of Minkah Fitzpatrick, TJ Watt, and Joe Haden could lend to added production by the Chargers offense. On the slightly lesser juice of either side of the passing prop line, take the over on Herbert’s passing yards.

The Player Props Tool likes Herbert for the most part on Sunday Night Football but is forecasting beneath the completions necessary to notch the over. Herbert is averaging 25.66 completions per game and the props tool projects the under with a 53% expected win rate. Herbert is projected for 24.16 completions of 38.2 passing attempts and the props tool aligns the under with a -1% return on investment. The Steelers have surrendered 21.11 completions per game to opposing quarterbacks along with a 63.9% completion rate allowed. At moderate juice and a razor thin margin from projection, dial in on the under for Herbert’s completions.