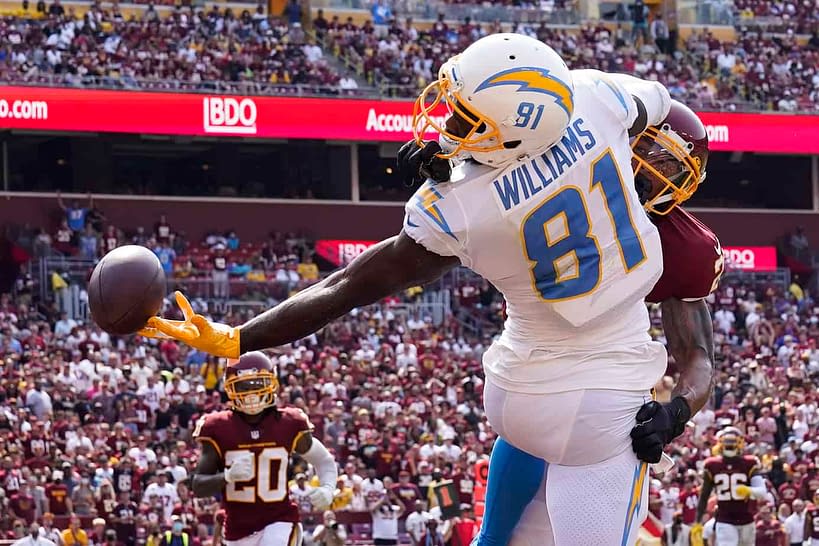 The Pittsburgh Steelers remain in the hunt in spite of injury as they venture to SoFi Stadium to battle the Los Angeles Chargers on Sunday Night Football. The Awesemo team has launched the NFL Player Props Tool, covering each of the major prop categories for each week throughout 2021. We will analyze all the odds at various sportsbooks to identify the best Week 11 NFL player props available based on the tool’s projected values and odds of success. Below are three of the bets for tonight’s Steelers vs. Chargers Sunday Night Football matchup.

With the latest groundbreaking features in sports betting featured in the OddsShopper tool, finding your best bets has never been as easy as it is now. With the ability to simply filter, sort and bet, you can now land the best bets and odds in 30 seconds or less. You can even create a Prop Party Parlay with a mix of your own favorite props of the day.

Mike Williams has been having a tumultuous season yet the NFL Player Props Tool leads to believe Sunday Night Football could be different. As you can see in the example above finding the best odds on Williams has never been easier using than with the revamped OddsShopper tool. Williams is averaging 67.6 receiving yards per game and the props tool gives the over a 68% expected win rate. Williams is projected for 68 receiving yards of 4.53 catches and the props tool aligns the over with a 27% return on investment.

The Steelers rank 15th in defensive pass DVOA and will also be without Minkah Fitzpatrick, TJ Watt, and Joe Haden. Williams has managed 17.8% of Chargers team targets through nine games played with 5.25 targets per game in the past four performances. At a moderately low receiving total against a wounded Steelers secondary, snag the over on Williams’ receiving yards.

Ben Roethlisberger is returning from COVID-19 protocol and the NFL Player Props Tool insinuates he’ll bounce back above his completions prop line against the Chargers. Roethlisberger is averaging 24.5 completions of 37.37 pass attempts per game and the props tool gives the over a 59% expected win rate. As Roethlisberger is projected for 24.01 completions of 38 pass attempts on Sunday night and the props tool projects the over for a 15% return on investment. The Chargers are ranked seventh in defensive pass DVOA according to Football Outsiders and have surrendered 20.11 completions per game to opposing quarterbacks, the league’s fewest. The Chargers also rank 15th in defensive pass rush and 13th in defensive receiver coverage by Pro Football Focus. With a ceiling of 38 completions in one performance this season (thanks in part to the safety net of Najee Harris), lock in the over on Big Ben’s completion total.

Austin Ekeler is having one of his best rushing seasons in five years and the NFL Player Props Tool forecasts him to best a modest prop total on Sunday Night Football. Ekeler is averaging 58.1 rushing yards per game through nine games and the props tool projects a 65% expected win rate. As Ekeler is projected for 72.63 rushing yards of 16.03 carries with the props tool lending a 24% return on investment by the over. The Steelers rank fourth in defensive rush DVOA by PFF while having surrendered 123 rushing yards per game, the ninth most in NFL. With the Chargers offense ranking fifth in run blocking per PFF, take the standard juice on an achievable total for Ekeler on the ground.