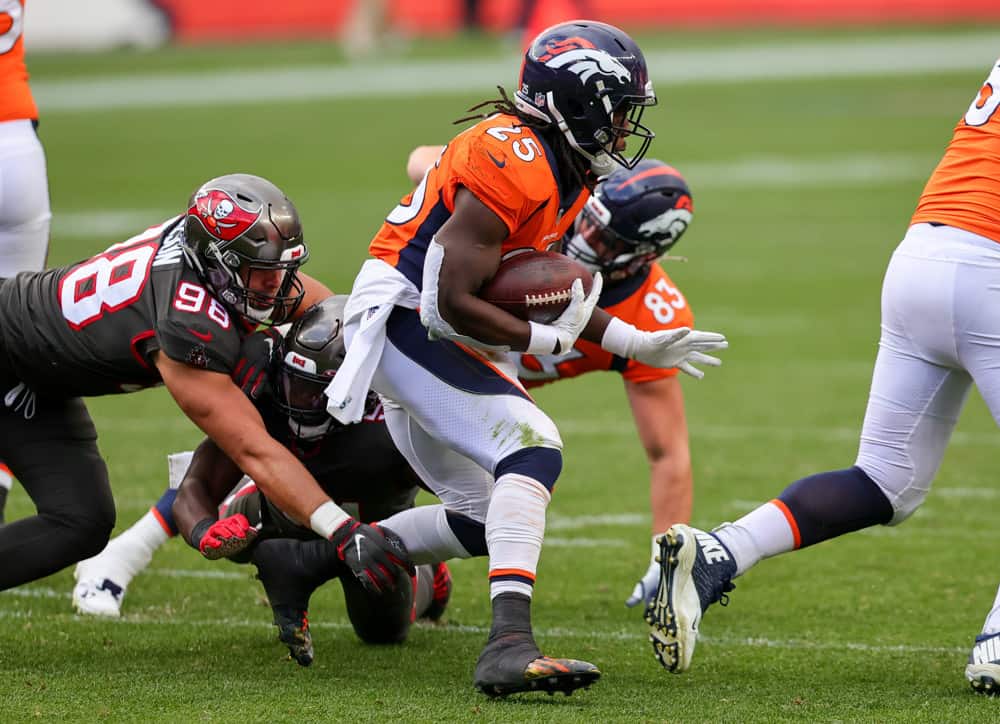 The injury bug surrounds Week 7 Thursday Night Football, as the hobbled Cleveland Browns play host to the Denver Broncos. The Awesemo team has launched the NFL Player Props Tool, covering each of the major prop categories for each week throughout 2021. We will analyze all the odds at various sportsbooks to identify the best Week 7 NFL player props available based on the Tool’s projected values and odds of success. Below are three of the bets for tonight’s Broncos vs. Browns Thursday Night Football matchup.

Melvin Gordon has quietly performed in a split backfield for Denver, averaging 55.3 yards per game in six games this season. As such, the props tool gives a 61% expected win rate to the over. With Gordon projected for 47.74 yards against the Browns tonight, the over has an expected 14% return on investment. The Browns defense ranks third in run DVOA, surrendering 70 yards per game to opposing running backs this season. Gordon has exceeded the necessary total for tonight’s prop in four of six games this year and surpassed 100 yards against the Giants in Week 1. Grab the over at moderate juice before line movement becomes a thing.

The Browns backfield is in shambles, now with D’Ernest Johnson starting for Cleveland. The NFL Player Props Tool projects a 62% expected win rate on the over, as he averaged 4.3 yards per carry through his four years in college at South Florida. Johnson is projected for 68.45 yards on Thursday Night Football and a 17% return on investment. The Broncos defense ranks 20th in run DVOA while surrendering 71.83 yards per game to opposing running backs. When healthy the Browns offense ranks second in offensive run DVOA, which not only speaks to the talents of Nick Chubb and Kareem Hunt but also to the coaching in Cleveland. Book the over on Johnson before the juice turns up.

Teddy Bridgewater is questionable for Thursday Night Football, though the props tool projects a solid game should he play. Averaging 252.33 yards per game this season, Bridgewater’s over has a 58% expected win rate according to the NFL Player Props Tool. He is projected for 238.76 yards against the Browns, and the over has an expected 8% return on investment. The Browns have underwhelmed defensively in spite of an array of talent while ranking 16th in pass DVOA and surrendering 243.66 yards per game to opposing quarterbacks.