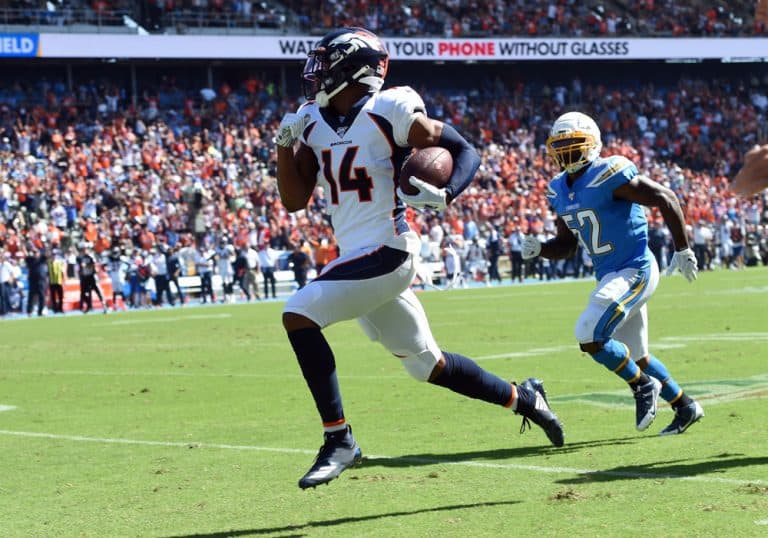 Another exciting week of NFL football kicks off tonight, with the Denver Broncos facing off against the Cleveland Browns. The game result looks to be a toss-up for NFL betting, so the better option could be to look at the other betting options tonight. Let’s take a look at the best Broncos vs. Browns bets for the Week 7 Thursday Night Football game, using the Awesemo OddsShopper.

As shown by the GIF, sorting the player props for this game by the expected win percentage brings this prop to the very top. This tool gives the over on this D’Ernest Johnson rushing prop a 77% chance to hit, with an expected ROI of 48%.

Both Nick Chubb and Kareem Hunt are out of action tonight, and the other running back, Demetric Felton, has taken two snaps out of the backfield this season. As such, this should be the Johnson show tonight. His career high for carries is 13, which he took for 95 yards last season. Johnson has been efficient in limited touches during his career, averaging 4.95 yards per carry. He will get plenty of opportunities to carry the rock tonight.

Javonte Williams has been consistently involved in the passing game, with three receptions in each of his past four games. However, the Browns have been tough against running backs, allowing a total of 21 receptions through six weeks. In a game that should be tight, the Broncos will not be in obvious pass situations like they have been in the past three weeks. The OddsShopper Tool gives this under a 71% chance to hit with a 13% ROI.

Following last year’s season-ending injury, the Broncos eased Courtland Sutton back into action. He has now played at least 88% of the snaps the last three weeks, which has led to target totals of eight, 11 and 14. Look for him to be heavily involved yet again Thursday against a defense that is really hurting. The OddsShopper Tool gives this over a 60% chance to hit.