The Indiana Pacers and Orlando Magic will face off in a battle of Eastern Conference stragglers. At 24-25, the Pacers would currently qualify for the play-in tournament, while the 18-29 Magic would not. However, the Pacers are playing on the wrong end of a back-to-back and won’t have point guard Tyrese Haliburton available. Bettors looking to score some value on Wednesday’s early games should tail this Pacers-Magic NBA player prop at FanDuel — the book has left too much value on the Aaron Nesmith player prop markets. Check out OddsShopper’s tools for other sharp plays.

The Indiana Pacers shipped Malcolm Brogdon up to Boston in the offseason and got Aaron Nesmith, among other pieces, in return. The third-year wing out of Vanderbilt never clicked for the Celtics, but the Pacers have trusted him as their starting small forward, and Nesmith has produced 9.4 points and 1.4 3-pointers per game.

Nesmith will benefit substantially from the matchup. The Orlando Magic allow the most 3-pointers per game to small forwards (3.6). They also allow the third-most corner 3s per game (4) on the highest shooting percentage (42.1%). Both factors bode well for Nesmith, who spends 51% of his minutes at the three and leads the Pacers in corner 3s attempted per game (1.9).

Nesmith could also see his usage tick up because the Pacers played last night. Buddy Hield logged 39 minutes and T.J. McConnell logged 41. Even if head coach Rick Carlisle doesn’t rule those guys out, he may look to scale back their minutes somewhat. Nesmith played less than a half-hour on Tuesday and will have fresher legs than his veteran teammates.

Nesmith hit a season-high five 3-pointers against the Magic in their first meeting and knocked down another two in their second. You should wager a full unit on a Nesmith’s 3-pointer props — but not all on the primary market. FanDuel Sportsbook has Nesmith at +140 to hit a pair of triples and +500 to hit three or more. Follow the recommended unit structure below to maximize your payout. Bettors yet to register at FanDuel can even score $150 in bonus bets following a $5 wager!

Bet on any NBA team to win tonight and get up to $1,000 in First-Bet Insurance from BetMGM 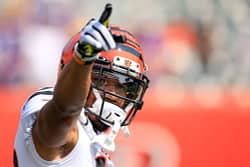