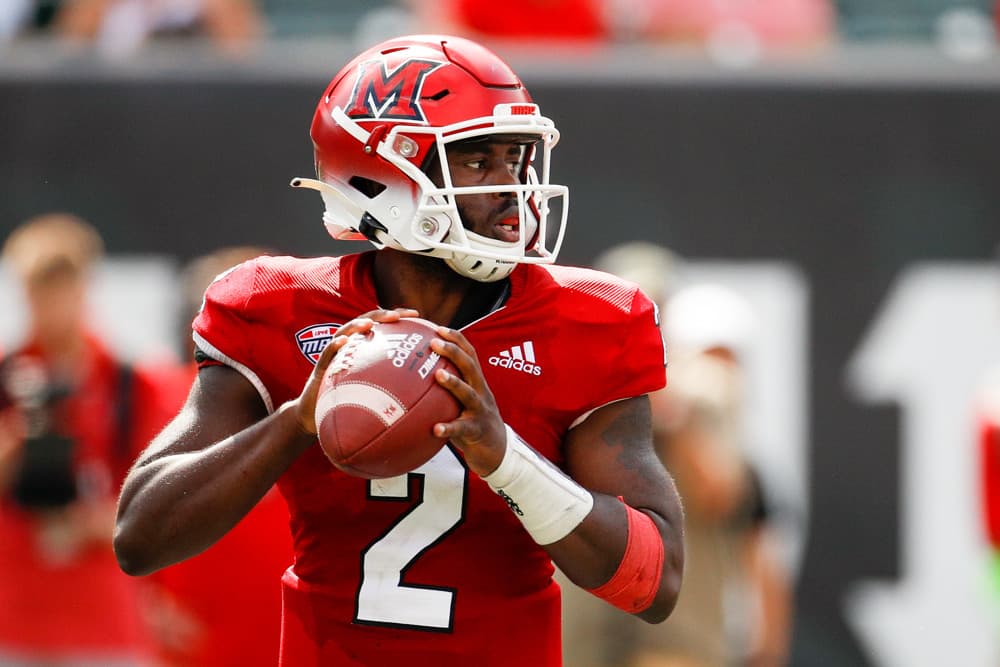 Week 13 of the college football season commences Tuesday in the MAC, with the Ohio Bobcats welcoming the Bowling Green Falcons and the Miami RedHawks facing the Ball State Cardinals. Read on for the best Bowling Green-Ohio and Ball State-Miami (Ohio) MAC bets, odds and picks.

Be sure to check out OddsShopper for the best odds.

Ohio is a flawed 8-3 team, but they still are led by the dynamic quarterback Kurtis Rourke. He has 3,257 yards passing, 25 touchdowns and just four interceptions. The Bobcats average 304.6 yards in the air. The problem is that they allow more yards passing and rushing than they gain, respectively outgained by 7.7 and 6.1 per game.

Bowling Green is in a similar boat but has two major flaws. The main one is that their offense lacks explosiveness, averaging just 24.7 points per game and ranking 103rd of 131 programs in strength of schedule. Bowling Green is just 6-5, although it is 5-2 in conference play.

Quarterback Matt McDonald is averaging just 242.2 yards passing per game and has just a 61.8% completion rate, neither of which showcases that they can sustain drives. While Bowling Green does only allow 160.7 yards per game through the air, it also has allowed a 66.1% completion percentage. That weakness will be on display against Rourke.

Quarterback Aveon Smith is leading Miami into its final regular-season battle. Smith ended last week’s 29-23 win over Northern Illinois with 185 yards passing and 105 rushing to go along with three combined touchdowns. That hasn’t been a consistent force for Miami this season, though. Smith has just 13 touchdowns on the season, with five of those coming on the ground. He is the team’s second-leading rusher behind starting running back Keyon Mozee.

Ball State has proven it can’t stop the run, allowing 187.8 yards rushing per game. It allows more than 10 first downs rushing per game, so Smith should be able to get through a weak Cardinals front. Ball State will start quarterback John Paddock as well, and he has 12 interceptions on the season.

It is tough to trust a defense that is significantly flawed in the run game, coupled with a quarterback that is turnover prone. While Smith has not consistently produced, his abilities as a dual-threat quarterback should propel the RedHawks to cover here.

Maryland! Get $200 in Free Bets on registration
Share on TwitterShare on FacebookShare on EmailShare on SMS