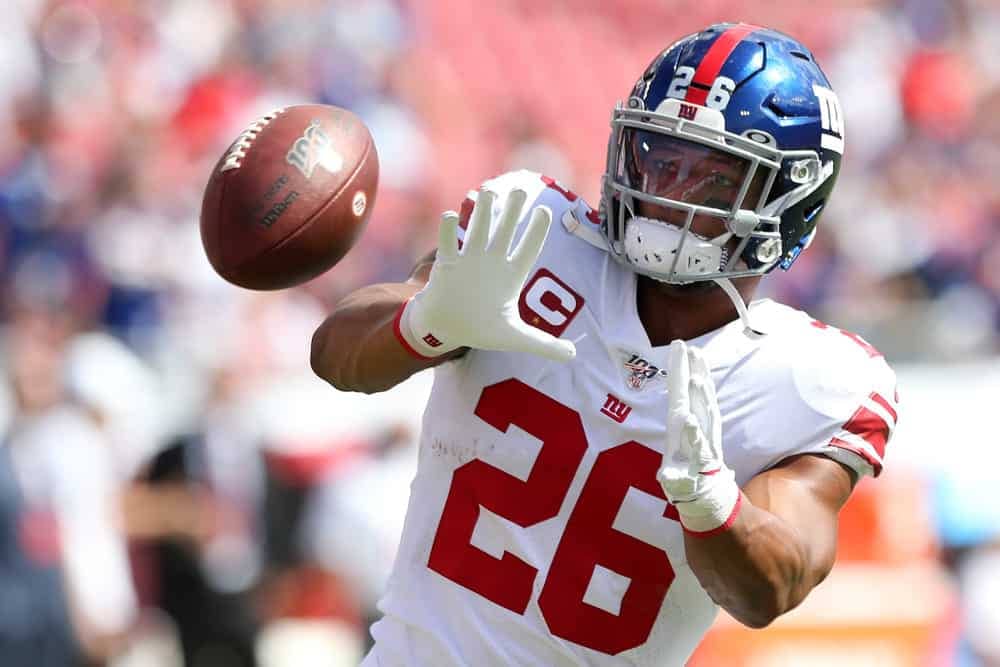 New York Giants running back Saquon Barkley will undoubtedly be highly sought-after as a free agent when he hits the market this offseason. Based on the opening Saquon Barkley next team odds, it’s a wide-open race for his services. Per PointsBet Sportsbook, the Baltimore Ravens and Buffalo Bills are the favorites to land Barkley if he is to leave the Giants, but there are several other teams lurking.

Saquon Barkley Next Team Odds (If Not Giants), Per PointsBet:

Barkley sounded realistic about his next contract when speaking about his future following the blowout loss against the Philadelphia Eagles in the Divisional Round last Saturday.

“I’m not really too concerned about resetting any [running back] markets or anything like that,” he said Sunday, when the Giants cleaned out their lockers following a 38-7 loss, per ESPN.

Barkley proved he still has plenty left in the tank despite a down year in 2021-22. He ran for a career-high 1,312 yards and 10 touchdowns in 16 regular season games, adding 57 receptions for 338 yards. It was his first full season without injuries since his 2018 rookie year.

“I know what I was on pace to do,” he said. “But having two years filled up with injuries and having a season not performing to the level I know I can perform doesn’t help. But I think I was able to show the type of caliber a player I am, the things I am able to do on a football field. That is something I wanted to do. That was my goal. I was able to accomplish that.”

Teams such as the Bills, Ravens and Miami Dolphins could all use a play-maker of Barkley’s caliber to try to get over the hump as Super Bowl contenders, but it appears that the Giants will try to work out a deal with the skilled back before letting other teams get involved.

“This is a special team to me,” general manager Joe Schoen said, per The Athletic . “It was my first year. We’d like to have all the guys back, I really would. But there’s a business side to it. There’s rules that you need to operate under in terms of the salary cap. Saquon, he’s a good player. He’s a great teammate. I loved getting to know him this season. He’s a guy we would like to have back.”

The Giants will also have to decide if they want to keep free-agent quarterback Daniel Jones around next year. While they decide what course of action they want to take for their future, the Saquon Barkley next team odds show that plenty of teams will be lining up to offer a deal if the free agency drags on.

Be sure to use OddsShopper tools to get the best value on NFL Playoff games!