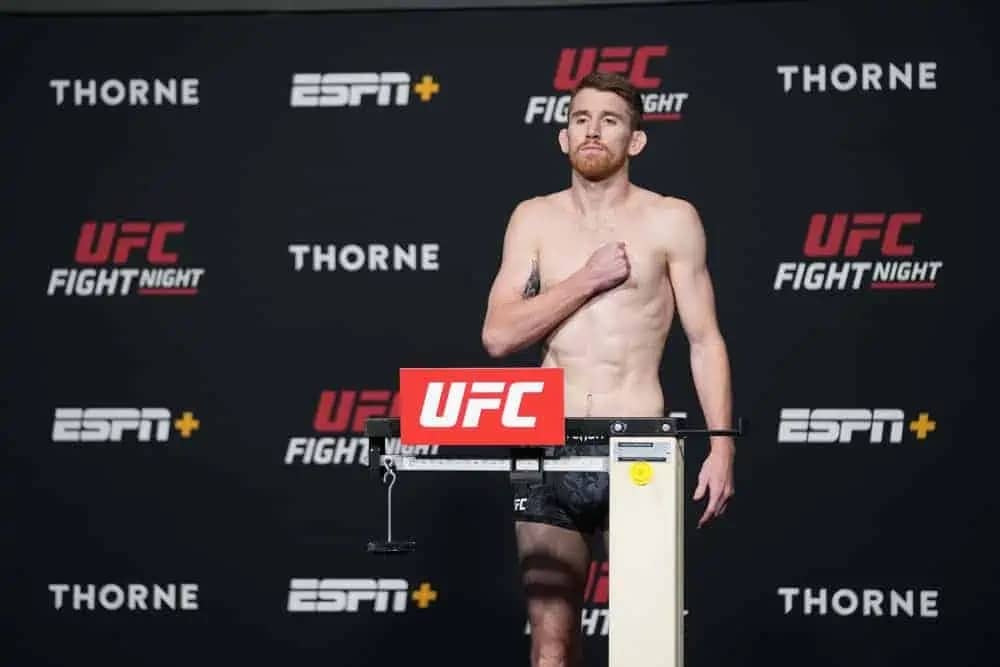 UFC Fight Night: Sandhagen vs. Song is set to get underway this Saturday at the UFC Apex facility in Las Vegas. While there are not many big names on this card, the main event should be a thriller between bantamweight contenders Cory Sandhagen (currently the No. 4 bantamweight) and Yadong Song (No. 10).

Sandhagen opened up as a -205 favorite and has since been bet down to -190 despite receiving roughly 75% of the tickets and handle. Song is looking to make a big jump up the bantamweight rankings while Sandhagen is trying to earn another shot at the title following his loss to Petr Yan last October.

Coming off his loss in an interim bantamweight title fight to Yan, Sandhagen looks to get back on track. A high-volume striker, each of his last two fights saw a combined 200-plus strikes landed, with each five-round bout going the distance.

However, he lost both of them via decision, as he has seen a dip in his striking accuracy when facing higher-level opponents. This trend developed over the last few years, as his three UFC losses were to Yan (No. 1), T.J. Dillashaw (No. 2) and Aljamain Sterling (champion).

While he was submitted just over a minute into his fight against Sterling, Sandhagen’s striking was a cause for concern in both of his losses to Dillashaw and Yan, as he failed to record a knockdown while posting an average significant striking accuracy of 41%, which is 3 percentage points lower than his career average. This scrap will almost certainly stay standing, with each fighter landing less than one takedown per 15 minutes of fight time since joining the UFC.

Sandhagen is obviously very talented, but he does not really have a marquee victory. He beat Frankie Edgar (currently No. 12) with a flying knee just one minute into the fight, but Edgar is in the twilight of his career and has lost four of his last five fights.

All six of his other victories in the UFC have been against opponents who are not even currently ranked.

Song enters this contest in a much different form than Sandhagen, winning his last three fights with each of his last two coming via knockout. Now, to be fair, all three of those victories were against unranked fighters.

However, back in May of 2020, he grabbed a marquee victory that Sandhagen has yet to accomplish when he beat Marlon Vera (No. 5) via unanimous decision. His only loss in his entire UFC career was to Kyler Phillips, who beat Song with his grappling.

That being said, Sandhagen probably won’t go that route. In fights that have stayed on the feet for the majority of the bout, Song is undefeated, a trend that will continue in this main event.

Song’s striking defense is better than Sandhagen’s, which could play a key role in this fight, considering Sandhagen’s recent bouts against Dillashaw and Yan. This fight is the biggest opportunity of Song’s career, and he should take advantage.

As an underdog, Song is 1-0 in his career. Meanwhile, Sandhagen is just 2-3 when closing any lower than a two-dollar favorite.

Both of these trends should continue in this fight, so roll with the underdog. Expect this fight to stay standing, and Song has advantage in that department based on Sandhagen’s dip in striking efficiency when facing higher-level opponents and Song’s excellent striking defense.

Song has defeated a high-level opponent (Vera), while Sandhagen is 0-3 when taking shots at the top of the division. While Song is certainly not in the Sterling/Yan/Dillashaw class yet, this fight could propel him in that direction.