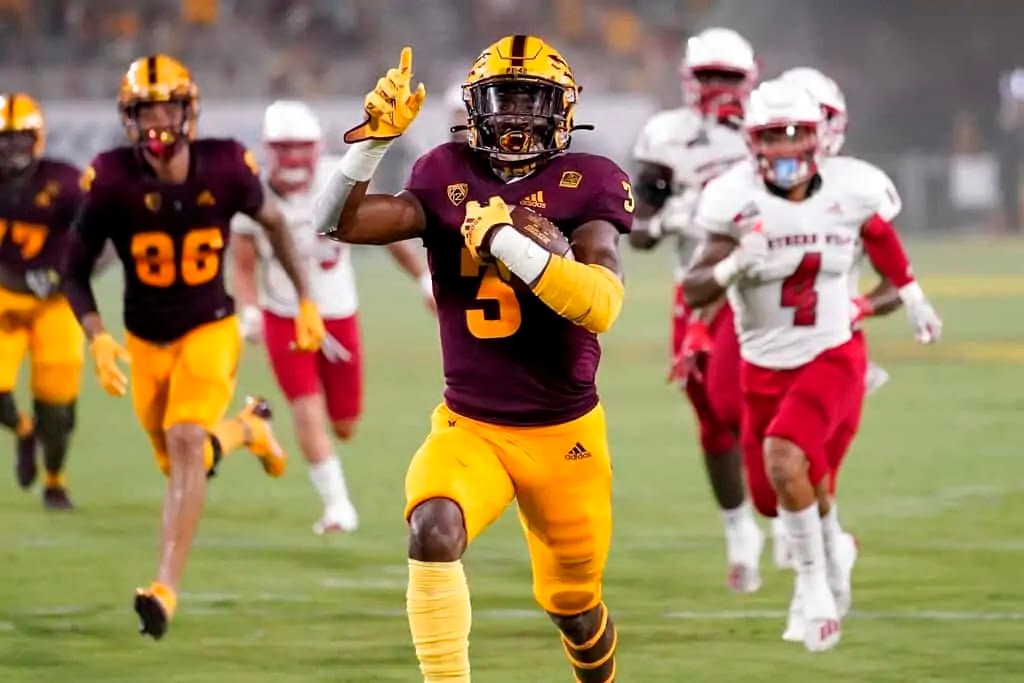 After three games in the college football season, there is a good sample size of game plans and which teams likely don’t have a chance at conference titles or the college football playoff. Arizona State is one of those teams that have started 1-2, with losses to No. 11 Oklahoma State and to unranked Eastern Michigan from the MAC. The Oklahoma State loss was expected, but losing to a school from the MAC at home as 20-point favorites says the Sun Devils just don’t have it this year. With the exception of at Colorado and the rivalry game against Arizona to end the season, Arizona State is unlikely to win any more games in the loaded Pac-12.

Meanwhile, Utah comes into this game 2-1 with a No. 14 AP ranking after disposing of San Diego State 35-7 at home last Saturday. Utah is the highest-ranked one-loss team in both polls. Its loss came at Florida in Week 1 in a game they could have won before a last-minute second-and-goal touchdown chance turned into an interception and a Florida 3-point win.

This is the first conference game for both teams. If Utah wants to defend as Pac-12 champions, they’ll have to get rolling with a win against an inferior opponent in Arizona State.

The Sun Devils are led by transfer quarterback Emory Jones, who only has two touchdowns through the air in three games. He’s been sacked four times but has yet to throw an interception on 74 attempts. Xazavian Valladay leads the Pac-12 in yards rushing with 361 and touchdowns with four. His 6.9 yards per carry are tied for second in the nation for anyone with 50 or more attempts. Arizona State averages 4 more yards rushing than passing, and it will rely heavily on Holliday against a Utah defense that has allowed 90 yards passing a game, best in the Pac-12 and second best in the country. If Arizona State wants to get anything done through the air, they will have to rely on sophomore Elijhah Badger, who ranks fourth in the Pac-12 in receptions with 17.

Utah is led by dual-threat junior Cameron Rising. The Utes are a balanced team, averaging 264 yards passing and 218 yards rushing, which leads the Pac-12. Rising has eight touchdown passes while averaging 6.8 yards a carry on the ground. Their leading receivers are two tight ends, with Preseason All-Conference Brant Kuithe and teammate Dalton Kincaid ranking Nos. 1 and 8 in the nation in receptions among tight ends. These two will be a handful for Arizona State, who allowed four receptions to the position last week.

The Utes offensive line has held up nicely allowing only three sacks on the season. The Sun Devils defense has only recorded one sack in their three games. Rising should have plenty of time to throw the ball. On the ground, lead back Tavion Thomas averages 4.4 yards per carry and has four touchdowns on 50 carries. Last week, the Arizona State defense gave up 258 yards rushing to Eastern Michigan’s Samson Evans. Evans had 315 yards rushing on 86 attempts all of last year. Thomas could have a big day here.

The spread for this game opened at 7.5 points and has since moved to 14.5. The total is 54 at most books, but FanDuel is currently listing it at 53.5. All three of Arizona State’s games have gone under, while Utah has gone over in two of three. With Utah’s stout passing defense and Jones’ lack of throwing the deep ball, the Sun Devils will have to control the clock and run the ball if they are to have any chance in this game. Utah doesn’t look for big plays and runs at an average pace. Arizona State ranks 120 of 131 FBS teams in plays per game. Utah will roll in this one, but the best bet of game is the under.