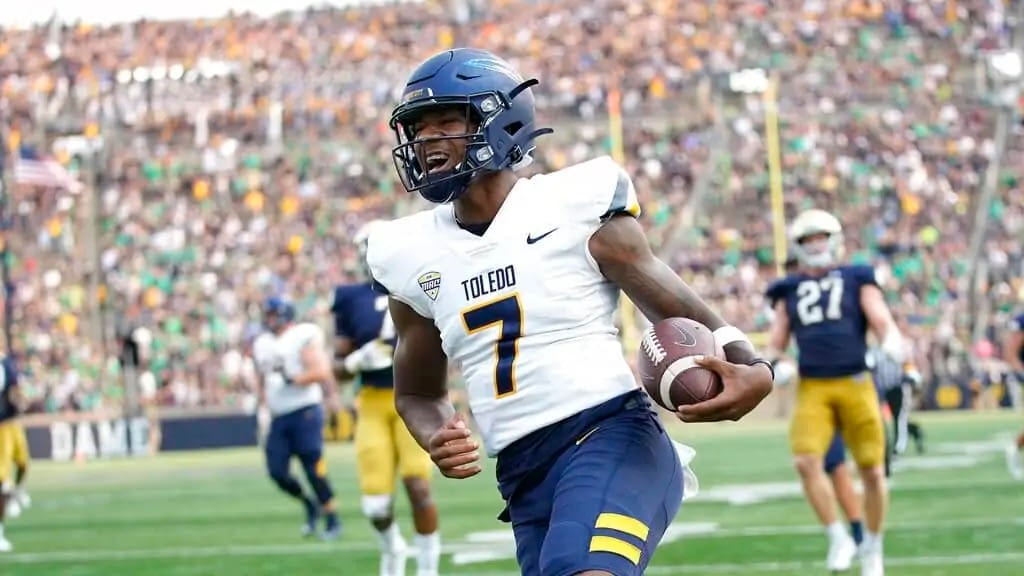 After scoring 21 in an eye-popping 77-21 loss in Week 3, the Toledo Rockets head out west to take on the San Diego State Aztecs. Can the Rockets use any of their “21 points on Ohio State” momentum here, or will they fall flat?

Besides a 38-point showing against Idaho State, the San Diego State Aztecs has struggled, posting 20 against Arizona and just 7 against Utah. Their offense ranks 116th in the nation, averaging fewer than 300 yards of total offense per game. This is to be expected when the starting quarterback, Braxton Burmeister, has just 40 attempts all season and a 52.5% completion rate.

The offense, without a doubt, relies on the rushing attack, with six players, including Burmeister, having 10 carries or more. While the Aztecs average 6.4 yards a clip, they have just three touchdowns and also have three fumbles.

Defensively, the Aztecs shine more with Jonah Tavai and Justus Tavai plugging up the middle and Jonah getting after the opposing quarterback. However, in coverage, they leave a lot to be desired. This is a team that is built for trench warfare.

Dequan Finn Can Only Do So Much

Toledo managed 21 points against Ohio State but also surrendered 77. So it begs the question — were the Buckeyes trying to prevent them from scoring?

Rockets quarterback Dequan Finn passes the ball more than Burmeister, with 74 attempts, five touchdowns and a 59.5% completion rate. Still, the offense, like the Aztecs, also operates through the rushing attack.

Finn has four touchdowns rushing on eight designed runs, and four running backs have at least 16 carries. All of these running backs except one, Micah Kelly, have scored. They’re close to the Aztecs, averaging 6.5 yards per carry as a unit.

Through the air, Finn mainly targets his two primary wide receivers, Jerjuan Newton and DeMeer Blankumsee, which he may do even more in this one.

On defense, the Rockets have some excellent players, and defensive interior lineman Desjuan Johnson leads the way with six total pressures and seven tackles.

This game will be a battle of rushing attacks against the defensive lines. There’s more talent with the Rockets, but the safest bet here is the under. Neither of these teams should score very many points unless Finn connects with either of his two receivers more than a few times. Expect a grueling game with the clock ticking away; there are going to be a lot of carries in this one.

All statistics come from Pro Football Focus and NCAA.com.

Bet $5, Get $150 in any college football game regardless if your bet wins or loses
Share on TwitterShare on FacebookShare on EmailShare on SMS