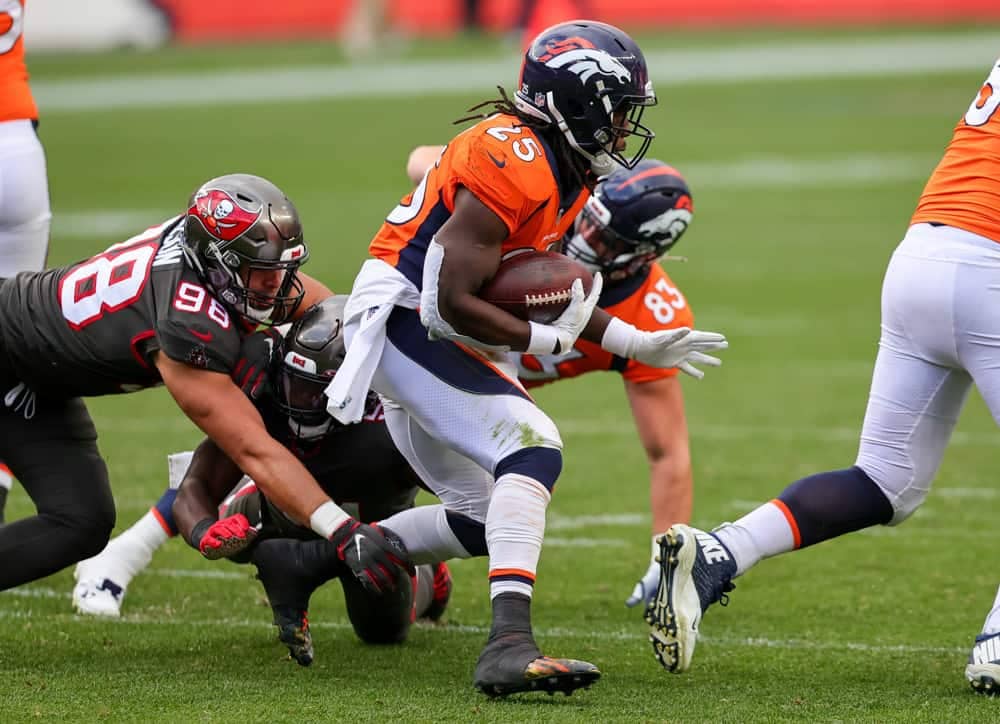 Shortly after being released by the Denver Broncos, Melvin Gordon has found a home. NFL Network reported Monday that Gordon and the Kansas City Chiefs were in agreement on a deal. Let’s take a look at the Melvin Gordon Fantasy Football outlook following the news.

Gordon came into the season as part of a strong tandem in the Denver Broncos backfield, then figured to take over after a season-ending injury to running back JaVonte Williams. But after a continuing issue with fumbles, and clearly losing a step in his eighth NFL season, Gordon fell out of favor with coach Nathaniel Hackett. Prior to getting cut, Gordon had 90 rushing attempts for 318 yards and two touchdowns, running for just 3.5 yards per attempt.

Now he’ll have a chance at another fresh start with a true contender. And going from a struggling Broncos offense that has managed only 319.1 yards per game, to a Chiefs team that leads the NFL with 430.0 yards per game, should open things up for Gordon, who is likely to find himself in a similar secondary role.

Get first-bet insurance up to $1,000 when you bet an NFL game

Kansas City has been known to give veteran playmakers a chance midseason under head coach Andy Reid. In 2020, the Chiefs signed Le’Veon Bell in October prior their run to a second straight Super Bowl, but his contributions were minor. In nine regular-season games, Bell rushed for 254 yards and two touchdowns, but after he was given scarce opportunities in the playoffs, Bell vowed he would never play for Reid again.

The Chiefs remain a pass-first team with quarterback Patrick Mahomes, and this season have prioritized rookie Isiah Pacheco when calling a running play. Pacheco has fully replaced Clyde Edwards-Helaire as the lead RB in Kansas City, rushing for 258 yards in the past three weeks while also gaining an impressive 4.7 yards per carry this season.

With Edwards-Helaire on injured reserve with a high ankle sprain, and offseason acquisition Ronald Jones not contributing at all, the Chiefs were down to Pacheco and Jerick McKinnon. So there is a spot for Gordon to get some early down carries in relief of Pacheco.

Gordon’s upside would be capped by how much work the Kansas City Chiefs give to Pacheco down the stretch of his first NFL season. But being a part of one of the best offenses in the NFL could give Gordon some value, especially if the backs ahead of him get injured.