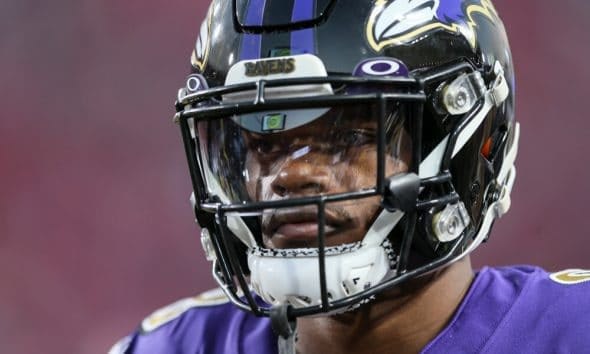 Week 2 brought some wild games, including a dramatic comeback win by the Jets over the Browns. There were some lopsided affairs too, including when the Jaguars blanked the Colts 24-0. Let’s get into a matchup between the Ravens and Patriots and discuss how things could play out for both sides.

Simply put, the Patriots offense has been a mess. They scored just 7 points against the Dolphins in Week 1, then followed it up with 17 points against the Steelers in Week 2. Mac Jones hasn’t shown much yet, combining for 465 yards passing, two touchdowns and two interceptions. It doesn’t help that he has a lackluster wide receiver group. Jakobi Meyers, DeVante Parker and Nelson Agholor are all nice supporting wide receivers, but without a clear No. 1 to lead them, the Patriots offense should remain limited. The NFL Player Props Tool projects Jones to throw for 237.3 yards against the Ravens.

The Ravens defense dominated the Jets in Week 1, holding them to 9 points in a victory. They couldn’t keep it together against the Dolphins, though, blowing a lead and giving up a total of 42 points, 28 of which came in the fourth quarter. Tua Tagovailoa threw for 469 yards and six touchdowns, while Tyreek Hill and Jaylen Waddle combined for 22 receptions, 361 yards and four touchdowns.

Despite their defense struggling last week, the Ravens offense looked great on their way to scoring 38 points. Lamar Jackson combined for four touchdowns, three of which came through the air. He also ran for 119 yards, making up for their lack of production at running back. They have remained without J.K. Dobbins (knee), who is considered week-to-week but has been practicing with the team.

Had the Ravens not blown such a big lead against the Dolphins, this line might be even more in their favor. They have a massive advantage at quarterback with Jackson, and tight end Mark Andrews is the best receiving option on either team. He dominated in Week 2, catching 9 of 11 targets for 104 yards and a touchdown. The NFL Player Props Tool projects Andrews to finish this game with 74.4 yards receiving against the Patriots.

The Patriots have historically had an excellent homefield advantage, but that was mostly with Tom Brady at the helm. They were 6-2 on the road last season but just 4-5 at home. Look for the Ravens defense to dominate this matchup and for Jackson to do enough to help lead the Ravens to a bounce-back victory.