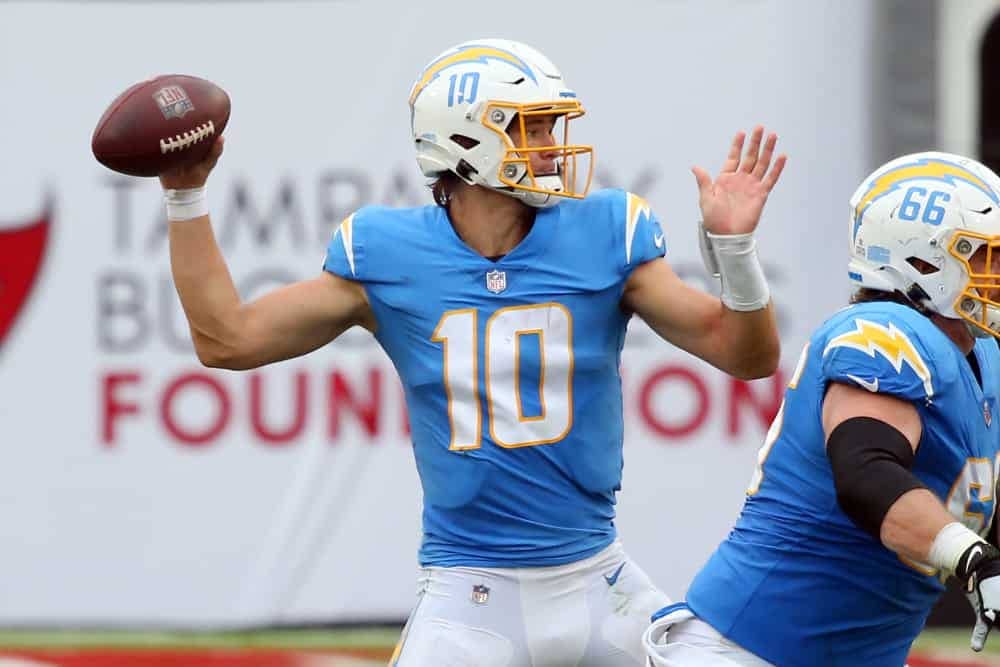 NFL Week 4 showcases a number of teams trying to bounce back from surprising rough starts to the season while the betting lines have reflected a hesitancy among the wagering public.

Each week in this space we’ll gauge the betting odds movement spanning Monday through Friday for all of the NFL games on Sunday to identify the largest movements and why they may have happened.

Using the FREE tools at OddsShopper we’ll pinpoint where these trends appear to be headed to capitalize on the best available odds before the weekend opens the flood gates to regressed values based on public action.

Let’s roll into Week 4’s largest betting line movements from this past week to find the best value possible before they slip away.

The Los Angeles Chargers (1-2) are mending their wounds following a hobbled 38-10 loss and head into NRG Stadium to face the 0-2-1 Houston Texans in Week 4. The betting lines opened last Sunday afternoon with the Chargers as 6.5-point favorites at steeper juice and dipped to -5 between Wednesday and Thursday. Though 56% of the public money has been placed on Los Angeles the slight line movement likely comes with uncertainty the Chargers offense can cover a touchdown on the road under their collective injury circumstances.

Justin Herbert has been dealing with a rib injury, though he practiced in full on Thursday, while other Chargers sustained significant injuries in their recent loss to Jacksonville. Defensive line star Joey Bosa and offensive tackle Rashawn Slater were placed on injured reserve and receiver Keenan Allen was limited in practice with a lingering hamstring injury. The offensive line may see the return of center Corey Linsley, though he was also limited in practice.

With question marks surrounding Herbert’s protection on the line, while already ailing from his injury sustained in Week 2 against Kansas City, the reverse line movement down to an even -5 on the road makes clear the public isn’t ready to hammer the Chargers.

While the Chargers are hampered on the offensive line we’ve yet to see Austin Ekeler get going, which could change against a Texans defense allowing the most rushing yards in the league through three weeks. With reduced juice and a deflated point spread it may be worth grabbing the Chargers now before the line ramps back up over the weekend.

The battle for a 2-2 record ensues in Detroit as the Seattle Seahawks venture to Ford Field to square off with the Lions. The betting line opened last Sunday with the Lions as 6-point favorites, ticked upward to -6.5 on Monday, and since tumbled down to -4 by late Wednesday. Despite the public wagering 53% of the bets on Detroit the line has come down with a number of key injuries on the Detroit offense.

The Seahawks remain fairly healthy aside from Marquise Goodwin being questionable for Seattle. However the Lions offense is reeling with D’Andre Swift, Amon-Ra St. Brown, and DJ Chark all missing practice this week while T.J. Hockenson and Josh Reynolds have been limited. The potential for quarterback Jared Goff to be without his two top wide receivers and starting running back have likely impacted the point spread movement, though Jamaal Williams has been excellent thus far out of the backfield regardless of Swift’s injury.

Seattle’s defense is tied for the second-most rushing yards allowed through three weeks and will now face a potent the Lions, who are third in the NFL in rushing yards. However, with questions surrounding Swift and the offense, it’s hard to recommend a play at the current line. The buy spot here is Lions -3.

Jacoby Brissett and the Cleveland Browns (2-1) are coming off a convincing 29-17 victory over Pittsburgh as they head south to Mercedes-Benz Stadium to face the upstart 1-2 Atlanta Falcons. The betting lines opened with the Falcons as 3-point underdogs at home and dropping to as low as +1 before settling at +1.5 early Thursday. While 57% of the public bets have been on Cleveland the line has moved in Atlanta’s favor.

The Browns are dealing with a couple of key injuries, including defensive end Myles Garrett suffering a sprained shoulder and bicep strain in a car accident earlier this week. Tight end David Njoku has emerged as a top target for Brissett and has missed practice all week with a knee injury, though neither player is ruled out for Sunday. Atlanta remains healthy across their roster with no injuries of note.

Considering how the Falcons have contended against the Saints and Rams, it may be worth grabbing the Falcons before any potential line movement on Sunday.