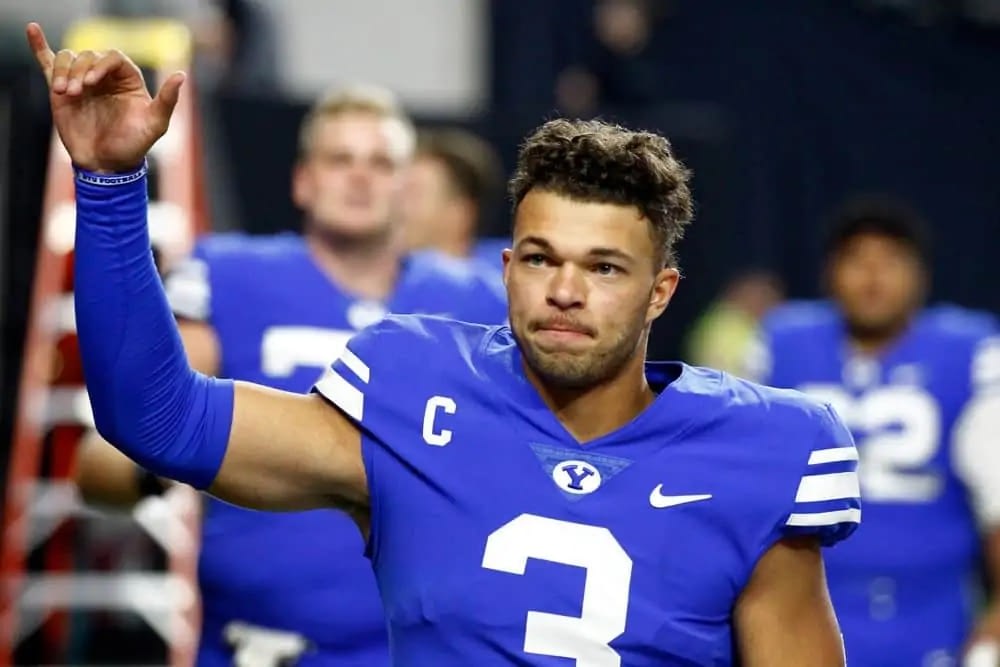 Power 5 conferences get the majority of attention in college football but there are still programs outside of the upper echelon of teams that put competitive products on the field.

The BYU Cougars and Wyoming Cowboys are two of those teams. The Cowboys travel to Provo to face BYU this Saturday as both teams vie for national respect.

Kickoff is scheduled for 9:15 pm CT for this nationally televised game. Late-night ESPN games always add some excitement to the end of a full slate of college football on Saturdays.

BYU is 2-1 and ranked 19th in the country. Wyoming is on a 3-game winning streak but will be underdogs on the road this Saturday night.

Cougars Need to Bounce Back

BYU’s 41-20 loss to Oregon last week was not what the Cougars had in mind. However, the Ducks might be a better team than most expected, so it should not be surprising that they handed them their first loss.

The Cougars have the opportunity to schedule tough opponents every season because they are an independent program. Week in and week out they face difficult teams like Oregon and Baylor. They will even play an SEC school, Arkansas, later this year. These types of games make them battle tested for moments of adversity.

The Cougars rank 48th in the FBS in total defense, giving up 340 yards per game. That needs to be improved as they move through their schedule. Despite being favored on Saturday, they will need to come out strong against a Wyoming team that is riding a hot streak.

Another Upset for the Cowboys?

This is Wyoming head coach Craig Bohl’s 9th season with the program. There is optimism that the Cowboys will improve upon their 7-6 campaign in 2021.

The Cowboys took care of business last Friday night with a 17-14 upset victory over Air Force. This was a huge win for the Cowboys who are now sitting with a 3-1 record as their confidence starts to grow.

While Wyoming’s offense wasn’t incredibly impressive last week, they got points when they needed them. Their defense stepped up against an efficient Air Force offense that is currently the top rushing team in the nation.

Wyoming has found success in their running game with 654 rushing yards gained on the ground so far as a team. It will be important for them to control the tempo against a very good BYU team on Saturday.

A win against a ranked opponent would give this program even more to believe in as they try to enter the conversation for a Mountain West title.

BYU is coming into the contest as a 21.5-point favorites against a Wyoming team tat is 2-2 against the spread so far in 2022. The Cowboys got the job done last Friday as 16.5-point underdogs, so they have proven to the rest of the country that they are up to the challenge. This is a large spread and while BYU should come away with the victory, Wyoming will make this a competitive contest and cover the 21.5-points.

The game total is sitting at 49.5 points. The total has gone over in 5 of the last 7 games for Wyoming and in 4 of the last 5 for BYU. This is going to be a high scoring affair by the final whistle so take the over on the 49.5-point total. Both teams will be trading some blows which will keep things interesting on Saturday night.