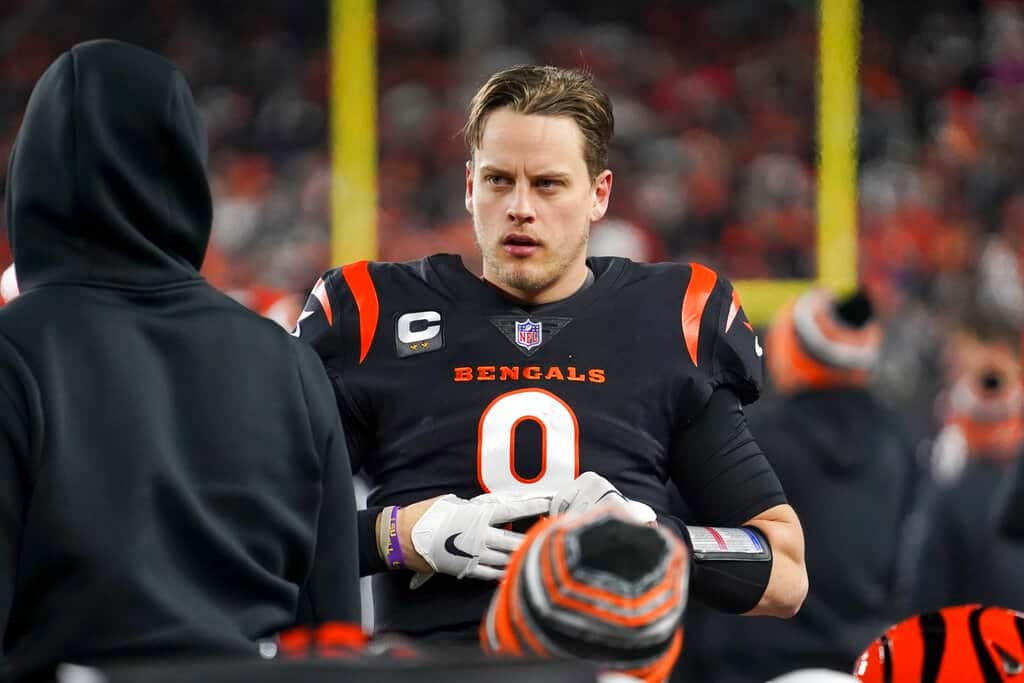 Bettors are flocking to get action on Cincinnati Bengals quarterback Joe Burrow to win the 2023 Super Bowl MVP. The Bengals’ quarterback did his job in the 27-10 dismantling of the Buffalo Bills in the AFC Divisional Round last weekend, setting up a date with the Kansas City Chiefs in a repeat of last year’s AFC Championship game. The Joe Burrow Super Bowl MVP bets have been pouring in throughout the NFL Playoffs.

Ohio! Your first bet on the Bengals during the NFL Playoffs is On Caesars! If you lose the first cash bet you place, you’ll receive a bet credit equal to your first bet - up to $1,500!

He was set at +900 before the upset win over the Bills and has since skyrocketed up the board. Check out the latest Super Bowl MVP odds below:

Joe Burrow completed 23 of 23 passes for 242 yards and two touchdowns on a snow-filled Highmark Stadium Sunday afternoon, once again asserting himself as one of the best big-game quarterbacks in all of football. Burrow and the Bengals will now head to the AFC Championship looking to benefit from the experience of their Super Bowl trip last season.

"I think we're a more complete team. I think we're a better team," Burrow said via Geoff Hobson of the team's website. "We just seem to make plays when it counts. That's all there is to say.

Burrow and Chiefs quarterback Patrick Mahomes have basically the same odds to win the Super Bowl MVP despite the Bengals taking over the role of favorite in this weekend's AFC Championship. Mahomes is also nursing a right ankle sprain suffered in the Divisional round win over the Jacksonville Jaguars but is believed to be ok to start the AFC Championship.

Per DraftKings, the Bengals are currently a 1.5-point favorite over the Chiefs in the AFC Championship. If you're looking to get some action, DraftKings is offering new users the chance to win $200 in credits with any $5 wager on the NFL Playoffs!

The Joe Burrow Super Bowl MVP bets show the popularity the former LSU Tiger has garnered in just his third NFL season, and while the odds are wide-open, Burrow seemingly has as good of a chance as anyone to win the award at present time.

Be sure to use OddsShopper tools for the best value and prices on moneylines, spreads and props throughout the remainder of the NFL Playoffs!