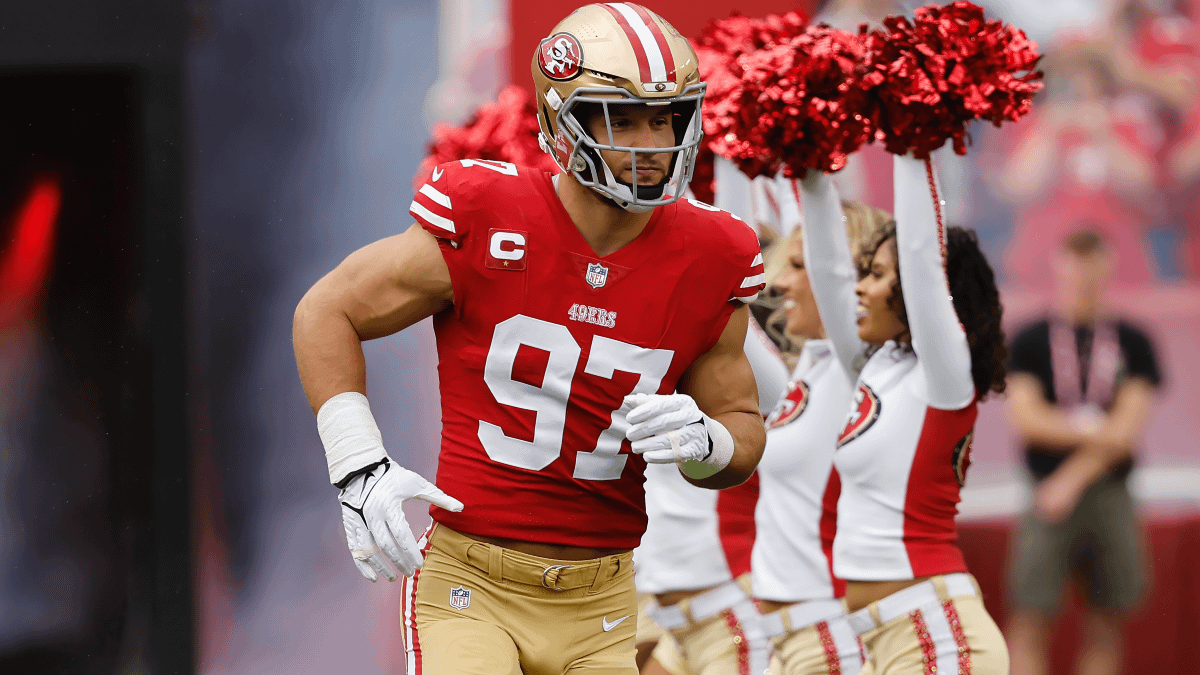 Rarely does a team lose its starting quarterback and enter the next week as a road favorite. But after opening as slight underdogs, the San Francisco 49ers now find themselves in that exact situation. With Trey Lance sidelined, Jimmy Garoppolo will again take the reins in San Francisco. Sportsbooks now predict the 49ers will win an average-scoring game over the Broncos on Sunday, although it took considerable money coming in on the 49ers for them to do so.

The Broncos actually opened as field-goal favorites for Week 3’s edition of Sunday Night Football, but they now are 1.5-point home underdogs. Denver has struggled under inexperienced head coach Nathaniel Hackett, and his odd decisions came under serious scrutiny in both Weeks 1 and 2. He’ll have a chance to reset the narrative in Week 3, but if the betting markets are any indication, such a turnaround isn’t in the cards.

After a disappointing Week 1 loss to the Chicago Bears, the San Francisco 49ers righted the ship in a 27-7 win over the Seattle Seahawks. Quarterback Jimmy Garoppolo completed 61.9% of his passes for one score and 7 net yards per attempt (NY/A) in the win. He took one sack but lost no yards and didn't throw an interception. Running back Jeff Wilson Jr. ran for 84 yards on 4.7 yards per carry (YPC), and versatile teammate Deebo Samuel added 97 all-purpose yards. The 49ers look great despite having lost their Week 1 starter at quarterback and two of their top three running backs

The offensive line deserves some credit for San Francisco's success. The unit, anchored by veteran left tackle Trent Williams, has generated 2.5 yards before contact per carry for its rushers and ranks 12th in adjusted line yards. While pass protection has been a bit of an issue -- San Francisco's quarterbacks have taken three sacks and have faced pressure on 20.6% of their dropbacks -- the line still ranks a respectable 11th in adjusted sack rate.

The defense will keep the 49ers in close games. Through two weeks, the unit ranks fourth in adjusted line yards and adjusted sack rate. The 49ers have surrendered only 4.1 yards per play, which ranks second, and their opponents have converted only 33.3% of their third downs, which ranks eighth. Talented pass rusher Nick Bosa already has three sacks to his name this season, and his presence along San Francisco's defensive line should terrify opposing quarterbacks. He hit quarterback Russell Wilson six times last year and recorded two sacks.

After two games, Broncos head coach Nathaniel Hackett might already be on the hot seat. A questionable 64-yard field goal attempt on Monday Night Football in Week 1 earned him considerable criticism. Several odd timeouts and delay of game penalties almost cost the Broncos their Week 2 game against the Houston Texans. Hackett has publicly acknowledged that he needs to hasten his decision-making process, but even if he can sort things out, the Broncos have more issues than just head coaching.

New quarterback Russell Wilson hasn't played well. He has completed only 58.9% of his passes for two scores and 6.81 net yards per attempt (NY/A). If the season ended today, that would be his worst completion percentage ever by a 2.4% margin. In Denver's win over Houston, Wilson entered the fourth quarter with only 116 yards passing. He also took a terrible third-down sack from Houston's 26-yard line that turned Brandon McManus' final field goal into a 50-yard attempt. His Week 1 sideline antics and awkward offseason videos seem like a perfect match for Hackett's forthright incompetence.

The two faces of Denver's franchise might look like complete jokes through two weeks, but the team's poor health is a far bigger story. Star safety Justin Simmons remains on injured reserve. Cornerback Pat Surtain and linebacker Josey Jewell are both questionable, as is wide receiver Jerry Jeudy. Surtain missed Wednesday's practice but worked his way up to a full participant by Friday. Jewell practiced in a limited fashion all week. Pass rusher Randy Gregory missed Wednesday's practice but avoided an injury designation. The Broncos should have most of these players available on Sunday Night Football, but it remains to be seen whether Hackett will limit them at all.

As legalized gambling continues to expand in the United States, sportsbooks have started to experiment with new markets. DraftKings and FanDuel now offer sack props for individual defensive players, and bettors can often find an edge there -- especially because books haven't figured out exactly how to set the price.

Bettors can buy Nick Bosa Over 0.75 sacks at DraftKings Sportsbook for a price of +105. Bettors can also buy Nick Bosa to get over 0.5 sacks at FanDuel Sportsbook for a price of -142. The Under for that market sits at +112. Targeting Bosa to get a full sack against Russell Wilson feels sharp given his recent performances against the quarterback -- and Denver's own offensive line struggles. The unit ranks just 19th in adjusted sack rate after two games.

OddsShopper's industry-leading tools allow bettors to identify the best available lines on all sorts of betting markets, from traditional spreads and totals to player props, and even quarter or half-based derivatives! Bettors can sign up for an OddsShopper account to access our model's predictions and best bets for each game. For the 49ers and Broncos matchup, the model has identified a Denver running back as a player to buy at his current price.

Backing Javonte Williams to catch at least four passes yields the highest expected ROI of any available prop, spread or total. Bettors looking to take advantage of that line can head to DraftKings for the best price on the market!