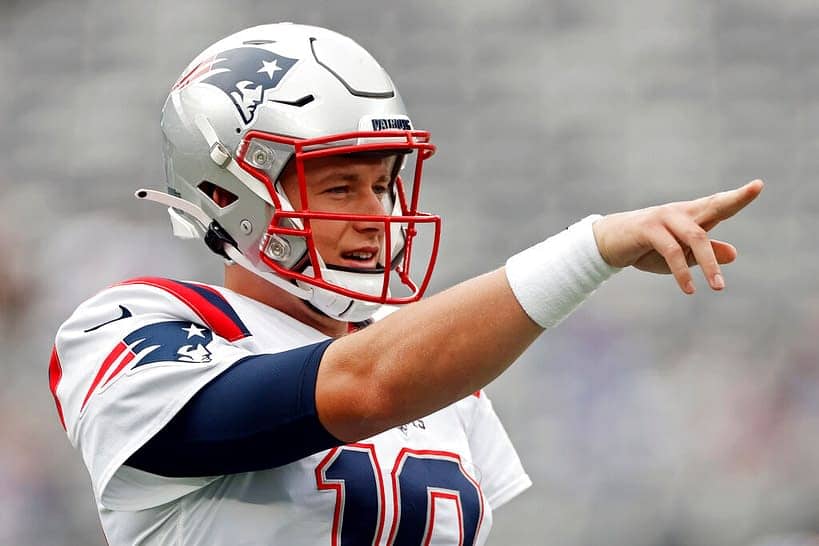 The New England Patriots and Buffalo Bills will face off on Thursday Night Football this week, but neither team is on limited rest. Both squads played on Thanksgiving last Thursday, so they’ll enter this matchup with the usual amount of rest. That means fans should expect a less unpredictable matchup than most Thursday night games this year — but bettors can still expect a solid return from these bold Patriots Week 13 betting predictions.

The below predictions more or may not correspond with available betting markets, but bettors should consider the below numbers when placing their wagers on Thursday Night Football. Who knows — maybe the below tips might help cash a lottery same-game parlay.

Is this even that bold? Josh Allen leads the NFL in interceptable passes (25) and interceptions (11). He has also fumbled the ball nine times, although only three of those fumbles were lost. The gunslinging quarterback has slung a bit too much recently — over his last five starts, Allen has averaged 1.4 interceptions per game. The elbow injury that almost kept him out against the Minnesota Vikings might just be holding him back.

Allen will face a tough New England defense that ranks fifth in takeaways per game (1.6). Their elite pass rush accounts for some of that success — the Patriots rank second in pressure percentage (27.3%), which trails only the Dallas Cowboys. Forcing quarterbacks to hurry through their progressions can often force them to make mistakes or throw the ball poorly. Josh Allen should know, as he has completed only 33.3% of his throws under pressure, which ranks 30th.

Buffalo also lost left tackle Dion Dawkins to an ankle injury last week against Detroit. Dawkins sat out Buffalo’s first two practices this week and is questionable at best for Thursday’s contest. The Bills replaced him with David Quessenberry, who has played 289 snaps this year and owns a PFF grade of 63.3, almost a full 10 points worse than Dawkins’ grade. Look for Allen to face plenty of pressure — and make plenty of mistakes — on Thursday Night Football.

#2. Bettors Cash in on a D/ST Touchdown

If Allen struggles with turnovers, the Patriots will only need a bit of luck to take one to the house. The Patriots already have three defensive touchdowns to their name this year, including two pick-sixes — one of Aaron Rodgers, the other on Sam Ehlinger. They even got a scoop-and-score against the Detroit Lions after a Jared Goff fumble. Different players accounted for each score: cornerbacks Jack Jones and Jonathan Jones recorded the pick-sixes, while safety Kyle Dugger notched the scoop-and-score.

The Patriots could cash a ticket on a D/ST touchdown another way — with a kick or punt return. Cornerback and return specialist Marcus Jones ran one back against the New York Jets two weeks ago. Buffalo’s special teams have allowed the 13th-most kick return yards per game (41.5) and the 11th-most punt return yards per game (18.5) this season. Special teams coordinator Matthew Smiley is in his first year in the role, and Bill Belichick could catch him off guard.

New England opened as a five-point home underdog, and the books have set the moneyline near +200. But the Patriots match up well with a team like Buffalo for the reason outlined above: their strong pass rush can force Allen to make mistakes. But there is more to the matchup than New England’s likely edge in the trenches, and more signs make backing the Patriots a sharp betting prediction.

Further, Buffalo’s defense has suffered a ton of injuries and may regress as the season rolls along. The Bills were without defensive ends AJ Epenesa and Greg Rousseau last Sunday. After Von Miller went down, their pass rush just couldn’t bother Jared Goff enough to give the Bills an easy win. Rousseau and Epenesa have returned to practice, the former on Sunday and the latter on Monday, but their status remains unclear. Since Miller has already been ruled out of the Week 13 contest, the Bills will need all the help they can get.

Patriots Week 13 Prediction: The Underdog Gets Its Day