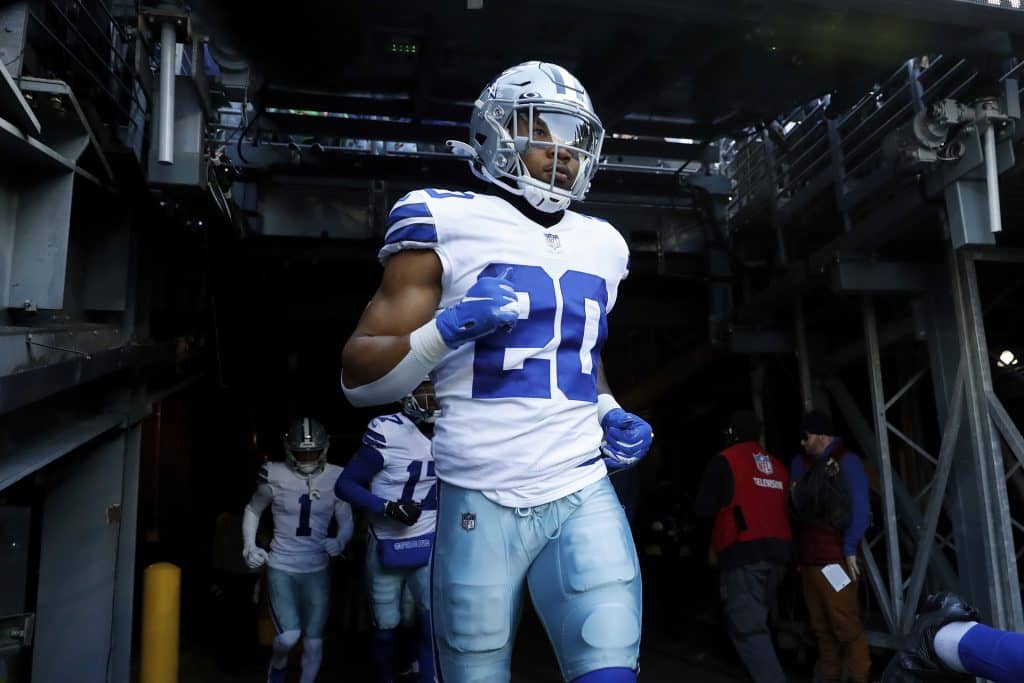 Just a few days after brutalizing the Minnesota Vikings, the Dallas Cowboys will host the New York Giants in a crucial NFC East battle. Both teams sit at 7-3 and are two games behind the 9-1 Philadelphia Eagles. The Cowboys are heavily favored in the NFL odds, and bettors looking for a positive return should tail these Giants-Cowboys picks and predictions — or check out OddsShopper’s tools for other smart plays. The Giants look to be running out of steam after a hot start and Dallas seems to be finding its stride. Let’s dive into the prediciton.

The 7-3 New York Giants have outperformed their numbers this season. The Giants rank only 21st in total defense-adjusted value over average (DVOA), largely by virtue of their 16th-ranked offense. They rank only 22nd in both yards gained (5.1) and allowed per play (5.8). The Giants are an absurd 7-2 in one-score games, but the wheels are starting to fall off — New York has lost two two-score games over the last three weeks.

The Giants have leaned on their rushing attack this season. They rank an impressive ninth in expected points added (EPA) per play (-0.02). Their passing attack has worked relatively well, too — that unit ranks 10th in EPA per play (0.11). Still, this offense can be reduced to two players: Daniel Jones and Saquon Barkley. The two have combined for 1,600 scrimmage yards this year, 45.4% of the team’s total. Jones’ passing yards account for 55% of New York’s total offensive production. No wide receiver has recorded more than 450 scrimmage yards.

The Giants played the Cooper Rush-led Cowboys close earlier in the year, but their weaknesses were apparent. Jones faced pressure on 44.9% of his dropbacks and had to scramble seven times. While he picked up 79 total yards on the ground, he completed only 54% of his passes, threw one interception and took five sacks. Every starting offensive lineman for the Giants except star left tackle Andrew Thomas has a PFF grade of 63.5 or worse.

New York’s defense has not played well in recent weeks. The Giants rank just 27th in defensive DVOA and have performed especially poorly against the run. They rank a dreadful 25th in EPA per rush attempt (0) and 31st in yards allowed per rush attempt (5.3). Detroit’s running backs racked up 150 yards and four touchdowns on 4.8 yards per carry last week. The Giants have allowed the fourth-most rushing yards per game to running backs this season (113.4).

Cowboys Also Struggling Against the Run

After a disappointing loss to the Green Bay Packers, the Cowboys rebounded with a resounding win over the Minnesota Vikings. The Cowboys now rank second in total DVOA behind their second-ranked defense, which also leads the NFL in pressure percentage (30.2%) and sacks per game (4.2).

The Cowboys have excelled on the ground this season. They rank fifth in EPA per rush (0.01) and 14th in yards per rush (4.6). Their offensive line ranks fifth in adjusted line yards and third in run-block win rate. With the full unit healthy and Ezekiel Elliott back in the fold, the Cowboys should remain a threat on the ground this week.

Dallas leaned on its rushing attack against the Giants earlier this year, and it worked out perfectly for them. Tony Pollard and Ezekiel Elliott combined for 178 rushing yards on 6.35 yards per attempt. The offensive line gave them 3.4 yards before contact per carry. The Cowboys controlled the ball for 32:42 and ran only 61 plays, good for more than 32 seconds per play.

Dallas’ defense has shut down opposing offenses but underperformed against the run. The Cowboys’ defense ranks third in EPA per pass (-0.11) but 17th in EPA per rush (-0.06). That said, their performance against Minnesota was encouraging — the Cowboys allowed only 4.3 yards per rush attempt after letting Green Bay gash them for 5.3. Still, their defensive front ranks only 30th in run-stop win rate and 16th in adjusted line yards.

Bettors should expect a slow-paced, run-heavy game. Both offenses will have a slight edge on the ground, although New York’s injury-riddled offensive line may limit Barkley and Jones. Some may expect the short week to hold back both defenses, but the under is 19-12 on Thursdays since 2021. Although breakaway runs could bust this bet, the range of outcomes favors the under. OddsShopper’s industry-leading tools allow bettors to identify the best available lines on all sorts of betting markets, from traditional spreads and totals to player props — and even quarter- or half-based derivatives. Bettors can sign up for an OddsShopper account to access our model’s predictions and best bets for each game. For the Thanksgiving matchup between the Giants and Cowboys, the model has identified the first-half moneyline as the best play at its current price.

Backing the Cowboys to win the first half yields the highest expected ROI of any prop, spread or total for this game. Bettors looking to take advantage of that line can head to DraftKings for the best price on the market.