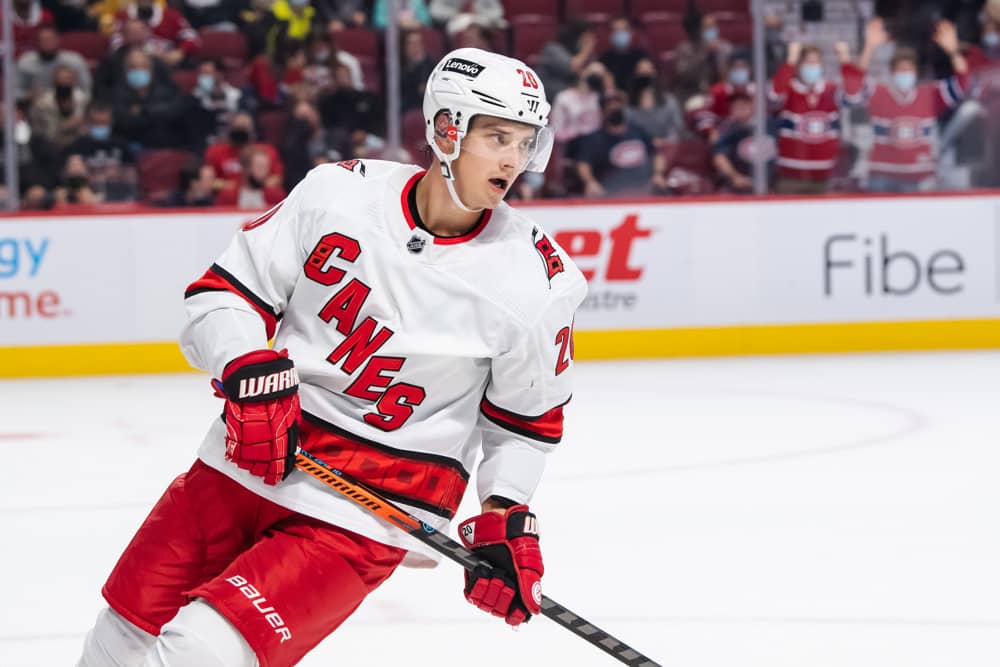 Friday’s fantastic 14-game NHL slate offers several exciting angles to bettors, and our three-team parlay prices out at +802 with three different start times. That should make for exciting viewing, so let’s break down why each of these teams should win, completing our NHL parlay for Friday.

Be sure to visit the OddsShopper tool for more NHL best bets.

Friday’s NHL slate starts at 1 p.m. EST with the Boston Bruins hosting the Carolina Hurricanes looking to set an NHL record. A Boston win would make it 12-0-0 at home this season, which would be the best season-opening streak in NHL history.

But Carolina profiles extremely well as a +130 underdog in this spot.

Boston (17-3-0) has been the best team in the NHL, but Carolina (10-6-4) also has been in elite form, playing a sweltering defensive style and allowing little in the way of cheap defensive breakdowns.

In November, these teams hold very similar expected goals-for ratings at 56.84% and 55.09%, and though the Bruins have clearly played a little sharper thus far, they project to be closer than their records suggest moving forward.

Carolina enters this contest on a three-game losing streak, including an embarrassing 4-0 loss to the Arizona Coyotes last time out, but when true to form has the ability to make any contest a coin flip due to its lockdown defense.

The Hurricanes are going to make this game a dogfight, and if they can finish quality chances and keep the Bruins power play to a modest output project as a very live underdog.

Both to the eye and analytically, Ottawa has clearly played a far better brand of hockey than Anaheim, something that is hidden by the fact the Senators have not converted chances at even a somewhat below average rate this season.

Ottawa has scored -14.62 goals above expected this season, and in November the Senators have shot just 7.60%.

The Senators have some very capable playmakers and finishers among the power play and top two offensive units, and do not project as a team likely to score well below expected rates over a larger sample size moving forward.

Ottawa’s defensive play is a clear concern but has been far sharper than Anaheim, which has allowed an NHL worst 4.23 xGA/60 in November.

This is a perfect spot for the more talented Senators to prosper facing a very thin Ducks roster, with value even as a road favorite in this matchup.

The Dallas Stars (12-5-3) are likely the better side than the Winnipeg Jets (11-6-1), but by far less a significant margin than this price suggests.

Winnipeg has played to a 55.61 xGF% in November and has one of the best goalies in the world, Connor Hellebuyck.

Dallas has covered up for a more modest 51.17 xGF% in November with extremely timely scoring, and has seen Jason Robertson push his play to an MVP level on one of the NHL’s best lines.

Winnipeg was humiliated last time out, losing 6-1 at the Minnesota Wild, and are going to play a far sharper contest here. At their best, the Stars have clearly proven to be a very frustrating side to play against, especially with one of the league’s best goalies, Jake Oettinger.

The -160 price suggests Dallas should control far more of the game and win this one 62% of the time, and it does not seem logical to back such a performance when the Jets should control more of the play outside of when Dallas’ top line of Roope Hintz, Joe Pavelski and Robertson is on the ice.

Your first NHL bet is on Caesars up to $1,250
Share on TwitterShare on FacebookShare on EmailShare on SMS