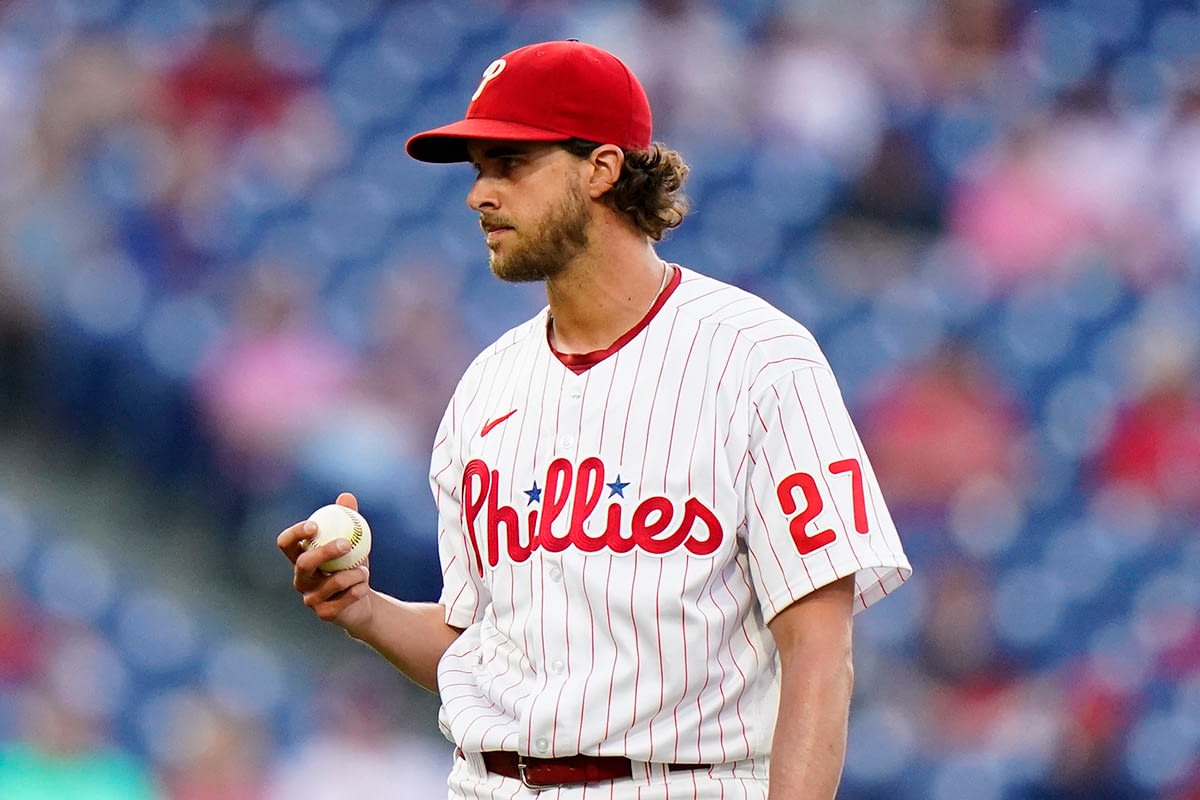 Happy Friday! My bachelor party is this weekend so hitting this five-leg parlay would be pretty nice going into the weekend. Who else is ready to party?! This Prop Party parlay features up to FIVE Player Prop bets that’ll give you the best chance to win based on our Stokastic simulations. The prop party is the most popular betting combo within the Stokastic community and Alex “Awesemo” Baker – the world’s #1 daily fantasy player – uses these almost exclusively when he’s looking for an edge. This piece will use the OddsShopper MLB Parlay Builder paired with the Stokastic MLB projections to make the best MLB picks and parlays today.

Leading off this Friday parlay is the New York Yankees hosting the Boston Red Sox. The Yankees have won three-straight games against the Red Sox and have won four straight overall. After clinching a playoff berth last night, they will send their undisputed ace Gerrit Cole to the mound as he looks for win No. 13 on the season. Cole leads the league in strikeouts with 236 as he had 10 strikeouts in his last matchup against the Red Sox. He is great, but the main storyline remains Aaron Judge in his quest for the Yankees home run record. Pretty remarkable that Judge not only has 60 home runs, but he leads the league by 20 bombs! Judge will draw a matchup against left-hander veteran Rich Hill, so he will get the platoon advantage. In five of his last eight starts, Hill has allowed four or more earned runs. The Yankees are favored on the moneyline at -225, so this isn’t a crazy bet, but it’s a great start to our Prop Party parlay as the Bronx Bombers should roll in this matchup. They have won 18 of their last 19 games against the Red Sox at home following a win. Pretty strong trend leading us to the Yankees tonight.

After a sweep against the White Sox, the Guardians now lead the AL Central division by seven games as they attempt to get one step closer to clinching the division tonight on the road against the Rangers. It’s a little surprising to see the Rangers favored in this matchup as the Guardians have won 15 of their last 18 games. It is likely due to the pitching matchup, as the Guardians will start rookie right-hander Cody Morris against one of the Rangers’ best starters in Jon Gray. This will be only the fifth start for Morris, but he has been solid in each outing. Morris has ramped up his pitch count in every start and has a pretty impressive 2.30 ERA, allowing only four runs in those four starts. On the flip side, Gray is coming off of an injury and this is only his third start since coming back. He won’t be stretched out and this is a tough matchup for him. The Guardians lead the league in lowest strikeout rate and have been clicking on all cylinders lately. This feels like a steal getting the Guardians at +1.5 tonight, but let’s add it to our parlay and keep the ball rolling. This bet has an xWin rate of 65%. 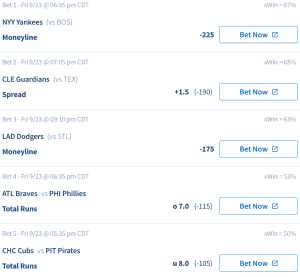 Even though the Dodgers have the NL West division wrapped up and lead the National League by 9.5 games, they haven’t pulled off the gas just yet. This will be a good three-game test series against the Cardinals, who are heavy favorites to win the NL Central division. These teams could meet in the playoffs, so this is a good warm-up. Following a home win, the Dodgers have won 16 of their last 17 games against NL Central opponents. They dominate this division and tonight should be no different. Andrew Heaney will take the bump for the Dodgers as his pitch count is rapidly declining to save him for the playoffs. Despite the lower pitch count, Heaney still went four innings in his last start, allowed only two hits and struck out eight batters. This bullpen and offense are electric as well, so having their starters not pitch a quality start isn’t all that big of a deal right now. The Cardinals will counter with Jose Quintana, who has been on five teams in the last three seasons. Since joining the Cardinals in early August, Quintana has been solid, but this Dodgers team is a different beast. We’ll take another heavy moneyline favorite for our third bet of this five-leg parlay.

Nothing better than betting on a game where both teams are in the heat of their own playoff race. This divisional matchup between the Phillies and Braves should be great for each team. The Braves are just 1.5 games back of the division and the Phillies are 0.5 games back of the second wild-card spot. Aaron Nola will take the mound for the Phillies as the Braves are only implied for 3.2 runs. Shocking to see this powerful offense with such a low total, but that just shows how well Nola is pitching this season. He has a team-leading 3.38 ERA and a 0.98 WHIP. He has paired that with 210 strikeouts, which is on pace for his career-high for a season. However, in his last start against the Braves, he allowed four earned runs in his start. Jake Odorizzi will start for the Braves, which is likely where we will get most of our runs. Since joining the Braves, Odorizzi has a 4.54 ERA and a 1.43 WHIP. These are the worst numbers he has had since his rookie season. Both offenses rank in the top seven of runs scored this season. Gladly take over backing these two powerful offenses.

We go from an over run total in our last bet to an under in this game with the Orioles hosting the Astros. Nine of the Astros’ last 10 games against AL East opponents have gone under the total runs line. Would love to make that 10 of the last 11 tonight. For those who love betting the NRFI props, the under has hit in the last four games between these two teams in the first inning. Either way, you want to bet this game and take the under for total runs. By the names, this may not seem like a pitcher’s duel, but both starters can certainly hold their own. The Orioles will start Dean Kremer, their only pitcher with a winning record. A very impressive turnaround from his 0-7 record last season. Kremer has a career-best 3.33 ERA and 1.27 WHIP. Jose Urquidy is inconsistent when he starts and his outcomes are all based on matchups. In his last start against the Orioles, he allowed three earned runs, but still recorded a 3-1 loss. Unlike the Braves and Phillies game, this matchup means pretty much nothing. The Astros have already clinched and are well ahead for the No. 1 overall seed, while the Orioles have a less than 1% chance of making the postseason. This number is too high. Take the under and let’s have a great Friday!